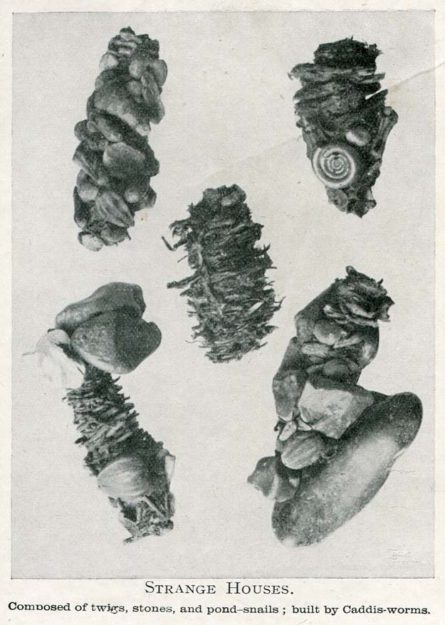 In collecting the water weeds to which Melicerta attaches its tube, we are very likely to gather some of those strange aquatic insects called Caddis-worms, which delight to clothe their soft and otherwise unprotected bodies in garments composed of all sorts of odds and ends of plant and animal remains (b, Plate VI.). They vary a great deal in their choice of materials and perfection of workmanship, some appearing to be singularly slovenly and untidy, weaving together a perfect jumble of bits of dead leaves and twigs of all shapes and size into a rough more or less tubular garment. There is method in their madness, however, for probably their untidy clothes, when the insect suddenly withdraws within them and remains quiescent, look far more like part of the natural debris of the bottom of the pond than do the more tidy and symmetrical productions of some of their relations. A very large proportion of the Caddis larvae collect pieces of leaves or the small stems of water plants, which they fasten together with a natural silky secretion, sometimes lining the whole tube or case with silk ; but there are several who form their tubes out of grains of sand, particles of earth, and small stones, and one is particularly fond of collecting the tiniest of water-snails shells, which it attaches on to its case with a blissful disregard as to whether the shell is still tenanted or not, so that a poor baby water snail may often be seen, upside down, an unwilling captive on top of the tubular case of this Caddis larva. It appears at first perhaps a strange habit, this collecting together of materials so diverse, and their formation into a tubular portable dwelling or garment. But we must remember that although the caddis larva has a fairly hard head and legs, its body is soft, plump, and altogether a toothsome sort of morsel for many a hungry denizen of the pond ; and so this habit is really a necessity, a means of hiding from view and protecting the soft, defenceless body.