Now, the water-spider lived by himself in a bubble of his own making. His legs were stout and long and hairy, his countenance was horrible, and his bite a thing to be avoided. When the newt first saw him he was devouring a caddis-worm. Vanity had been the worm’s undoing. Instead of casing itself with tiny sticks and pebbles and sojourning at the bottom, as Nature ordained, it had put on a gaudy livery of starwort leaves. Trusting to this elegant protective mimicry, it boldly sought the surface. The disguise availed it nothing. The spider drove its fangs through the flimsy covering that but half concealed its head. The newt had seen it all. The bunch of animated foliage carelessly advancing, the spider’s leap from its bubble, the glint of its shears as
p.161
they met in the wretched creature’s neck, the ghastly quivering tremor of the case. Then the fierce eight-legged efforts to extract the victim, and finally the
p.162
awful cunning that seemed intelligent of Nature’s devices, and pulled it out, as any angler would, tail foremost. 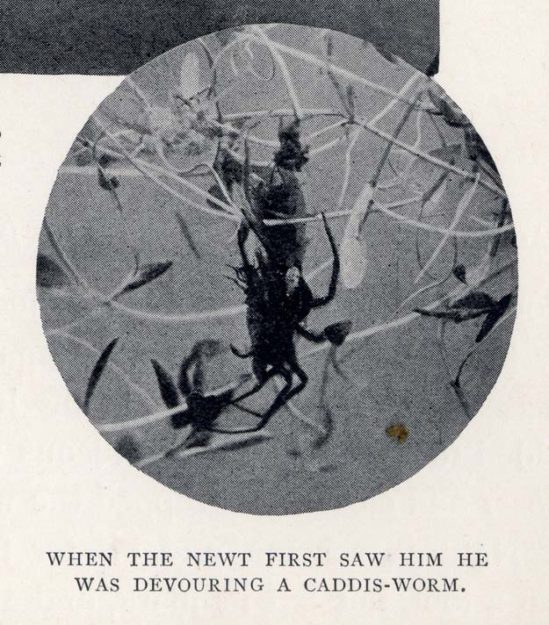 It was not so much animus against the spider as a longing for the worm that brought about the conflict. For the newt to snap at it was certainly unpardonable. Had he anticipated the resultant display of force, he would have hesitated. He had judged the spider solely by his size. When he felt six legs firmly fixed about his face, when he felt the cunning leverage of two more added to the pull, and a hideous pair of jaws drawing closer and closer, he dropped the worm, a useless martyr in Nature’s scheme, and bit for freedom. The spider lost a foot, but left its mark, and the spider’s hairy foot was not worth eating.