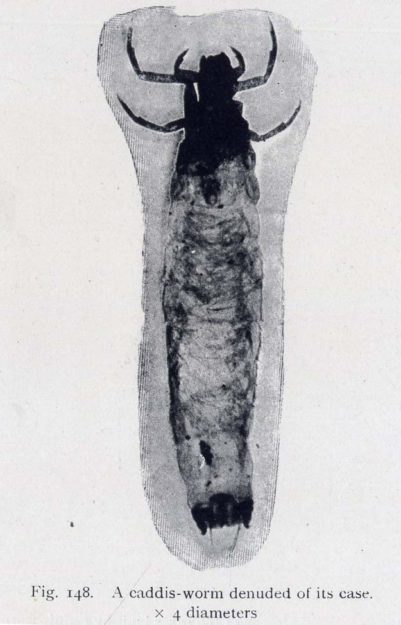 The larva of these insects are extremely interesting on account of this curious habit of building cases or tubes in which to protect the more tender parts of their bodies from sticklebacks and other ennemies. As soon as they leave the egg the caddis-grubs commence building the different species and families each manufacturing their dwelling-places in different forms and of different materials. even individuals of the same species will often use a variety of substance which happen to be near at hand. Fig.149 shows a number of these cases made of various substances and in many forms. The first is built of water-logged bits of stick cut to suitable sizes by the larva ; the second is composed of comparatively large pieces of sandstone ; the next in order is a neat form made of minute pieces of wood cut into nearly equal lengths ; four and five are the homes of species which often build their cases of rushes combined with various shells of water molluscs. These latter are used with or without the consent of their tenants, who when once attached by the insoluble cement of the caddis-worm, become close prisonners and are dragged hither and thither entirely at the mercy of the grub. Number six represents another case built of stone, with one large stone attached at the side to make up for a general deficiency in weight. This kind of weighting is frequently done when the case happens to have been made too light in the first instance. Number seven is formed of convenient lengths of rushes ; eight is composed of everything as yet mentioned, including shells, stones, wood, rushes &. In nine and ten, however, we get a new variety, for these are thin tubes build of tiny grains of sand closely cemented together, to the outside of which are long twigs fixed, like the heavy stone of the former oinstance, for the purpose of giving a balance. The bottom row dhows some of these forms as they appear end on. 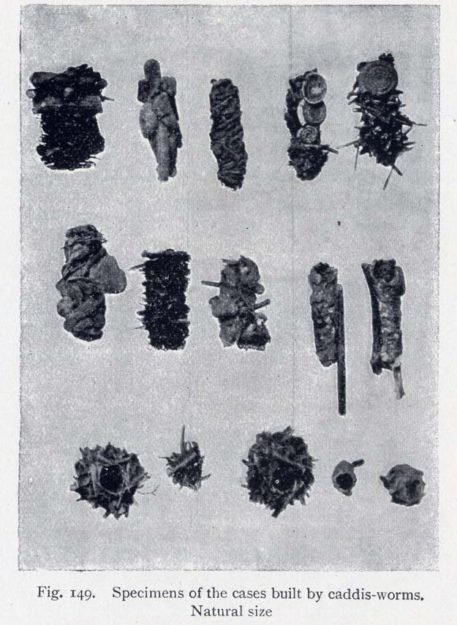 These aquatic architects arrange and build their tubes in a remarkably short time. From several of the cases shown on the photograph I had to remove their inmates for the purpose of this illustrations. These I then supplied with the remnants of one or two old cases, which, afer turning, them over suspiciously for some time, while prabably thinking of hungry sticklebacks, they at last proceeded to work together with all sped into new cases. From the time of removal of their own cases until they were completely encased in a new tube, they occupied just about three hours : which considering that they had no choice of material other then that provided, appear to me be rather smart work.
To remove a caddis—worm from its case is no easy matter, and if I refer my reader to Fig. 150, where is shown a magnified view of the latter end of the body of a caddis-grub, showing the horny hooks by means of which it retains hold ot its sheath. I think that the statement will readily explain itself.