The young after hatching remain for a few days in their « jelly home », and have no sooner left it than they seek what instinct prompts, un the way of building material- it may be grains of sand, sticks, leaves, or even the shells of molluscs with their living occupants.
The case may be built of stones, and supports in the form of long sticks afterwards added. The caddis-worms may choose to build its case so as to resemble a basket-like structure- or perhaps better still resemble, as Butler remarks, a number of needles in a partly finished stocking. Some species cut leaves into long, narrow pieces and entwine these spirally in a similar manner to a puttie. 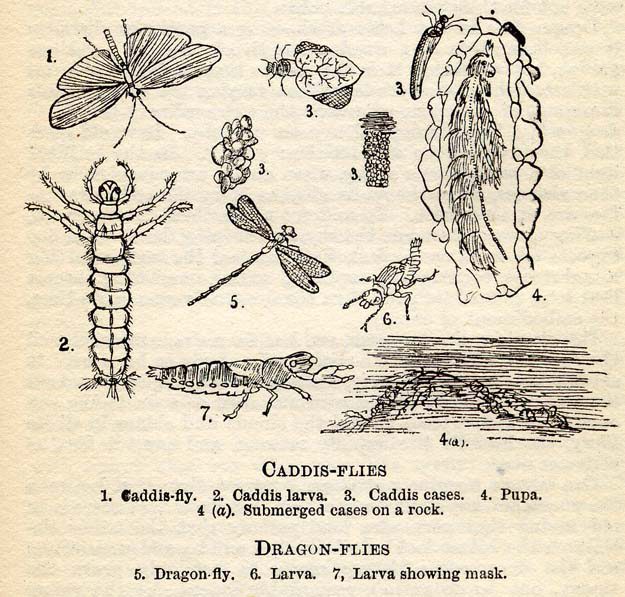 Some tusk-shaped cases are made of most minute grains of sand. So carefully are these tiny grains of silica chosen, and so accurately are they fastened together, that it is hard to believe the mosaic can be the work of an insect. Some larva prefer wall-soaked, partly-decayed leaves, and arrange them so as to produce a huge structure of flattened appearance . In fact caddis-worms, depending on the species, use practically everything of suitable specific gravity .
Cases composed entirely of seeds, sticks,leaves, stones, stems of plants are frequently found. In fact, as the reader will notice, each species of caddis-worm has its particular dress, which does not depend entirely on its surroundings. That is to say, one species prefers to use the shells of Planorbis – the flat-shells mollusc so common in ditches- and will never, if possible, use anything else ; yet should these molluscs be absent, the larva of Limnophlus flavicornis does not give up un despair, and having made a thorough but unsuccessful search for what it requires, sets to and builds a case of the most suitable material it is able to find. If then seems to lose all idea of making use of any one material in particular, but chooses the most suitable that it come across- sticks, stones, leaves, and even barley and wheat grains.
The building of the cases is by nio means plain sailing, even should the desired material be in abundance. For each little larva has to reckon with ninety or more brothers and sisters, not including distant relations and perfect strangers, who are equally keeen on making a home in the shortest possible time. And so, no sooner has onr caddis-worm deftly chosen a suitable object for its personal decoration and started weaving it to the others of its choice, than it is rudely interrupted by a relation or acquaintance.
Caddis-worms engaged in building fight continually, in a very similar manner as a large number of dogs would over a meagre supply of bones. The owner of a case just started is seized, and during the subsequent struggle loses the result of its labour- the various parts being instantly utilised by its friends and relations ; so one can imagine that the completion of a case is no easy matter should the necessary material be scarce.
The reader may wonder how, considering this excitement and trouble, it is possible to build a case resembling mosaic. It happens that there is usually no scarcity of sand in most places, and so those using this material can each build their cases without interrupting one another. But those dependent on the seeds of the water-mallow, and other rarities, have certainly a difficult matter to perform. It must, however, be remembered that in the struggle the strongest usually wins, and therefore its case is continually becoming longer and larger until finally completed. So that in an order of succession of strength all the cases are gradually finished, and the weakest, presuming that it has not ben eaten by hishes, water-beetles, or other ennemies in the meanwhile, is at length able to accomplish its purpose
Under suitable conditions a caddis-worm will take between four and eight hours to build and complet a case. Each stick or stone, or whatever it may be, in woven by silk to the next piece,, so that when the case is finished the caddis-worm lives in a silk-lined structure. Each stick is carefully cut to the right length before use, or sometimes is used and the non-required part is subsequently cut off. The cases are usually of a larger diameter at the head end.
The larva, which is a most voracious feeder, must necessarily grow, and as it does so the case naturally becomes too small for the tenants. This little creatures shows evidence of common sense, for it neither bursts the case by remaining in too long, nor evacuates it and builds another, but systemamatically adds a fresh part to the front, and cuts off a portion towards the end.
That the larva should be so eager to build a case is little to we wondered at, for every fisherman know that the caddis minus its case is a most pleasant sight to all fish.