« Sometimes he angers me
With telling me of the moldwarp and the ant, »
« And such a deal of skimble-skamble stuff
As puts me from my faith. »
King Henry IV. 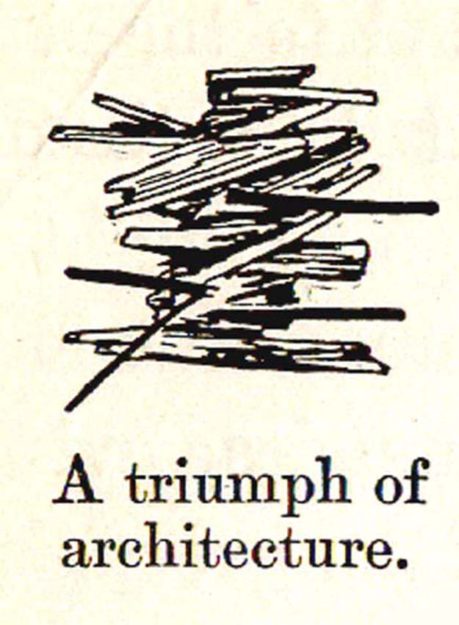 In the other brook, on stones in the water, yet near the margin, I have found small Caddis-worms in their tubes. Among those that I once brought home was a little fellow barely three eighths of an inch long. He had made his tiny case of grains of sand and minute stones very neatly put together.
For a time I gazed upon him, and then commenced the struggle of Sandy’s life. Very carefully I began to take his covering to pieces intending to see him make a new one. But so tenacious were the materials that I only succeeded in making a hole in the hinder portion leaving a litle of his body exposed. I was too much afraid of hurting him to go on.
But I had done enough. Sandy knew the dangers of having holes in one’s clothes. He would attend to that rent immediately.
I handed him a little stone; he clutched it and proceeded to undress, regardless of spectators. His covering was a very tight one, however, and it was very hard work. I think he would probably have succeeded in his efforts without my aid, but I « lent a hand », as Mr. Hale suggests. The dress was so tight around the neck that Sandy looked as if he were choking. But as the end of almost half an hour, Sandy caught hold of another caddis, I caught hold of Sandy, and he drew himself out.
There he was, a poor, naked, yellow worm in the waste of mighty waters contained in a small plate.
Now Sandy was in business. I had thought that he would be so exhausted he would lie down and rest after taking off that garment. But no. He was immediately at work. How did he know but a fish might be coming to swallow him before he could get covered again? There was no time to be lost in his opinion. 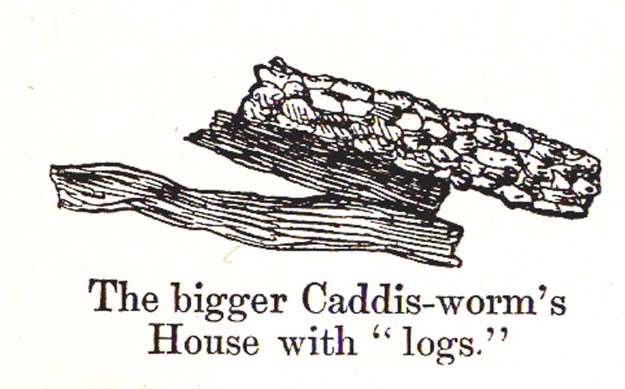 Poor Sandy! How he did toil and tug over the little stones. His black, ant-like head and yellow body with its two terminal hooks went squirming around under and over the stones. I thought he was debating whether he should make his new covering out of stones or of sand. I had destroyed his former garment sot hat he was obliged to make an entirely new one.
But I saw afterwards that what he had been doing was to anchor himself for his future work; since subsequently, when he was making his new coat, he was so attached to the larger stones that I could pull him around by moving any of the half-dozen around him. They seemed to be all connected by some thread-like substance, and I thought it a very sensible idea of Sandy’s, for it would have been awkward work dress-making, I suppose, without a certainty that he could keep in a fixed place.
Being anchored, Sandy worked, It lacked a few minutes of seven hours after this when Sandy slipped down his body the first section of his new dress. He had seemingly made this thin section round about his body near his head, and then he caught hold of a little stone that I had pushed near him, and with mighty squirmings slipped the section down toward the other end of his body. This was probably the « trying-on » part of the dressmaking. The garment was to be a « glovefit », without wrinkles, hence Sandy’s feats in wriggling.
In making the section he seemed to pick up the sand-grains and manipulate them ; but Sandy need not have been afraid of my stealing his trade, for though the operation went on under my eyes, I could not tell as all how i twas done. The first section covered nearly half his body, exclusive of his head. He manipulated a while longer, and drew the section down further still. I had been thinking that he had not drawn it quite far enough, for I was almost sure I saw one of the hooks at the end of his body peeping out. That showed afterward, too, for the section went uo near Sandy’s head again, and left his rear half bare. But Sandy knew what he was about. He had made a dress before. He caught hold of the stone and shoved the dress down his back again. 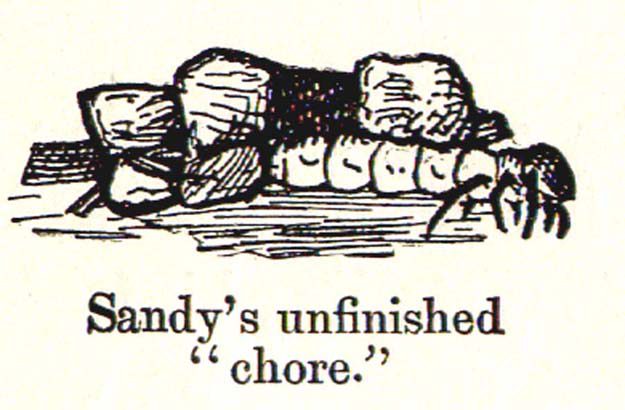 Then I went to bed and left Sandy to his job. It was « quite a chore », as a neighbor of mine says of other things.
When I arose the next morning, Sandy apparently had not made much progress in the length of his garment. He lay on his back some of te time that day, and rested from his toil, I thought, but the next morning revealed a sad state of affairs. Poor Sandy had spun his little life away. I brought him a bit of grass as refreshment, but i twas too late. He was quite stiff and dead when I tried to turn him over. His dress covered about two thirds of his body, reaching well toward his head on his back, but I never had the opportunity of seing what was his intention about unmooring himself from the larger stones, when his dressmaking was done. Perhaps he had no such intention.
My caddis cases varied in length from seven sixteenths to three quarters of an inch, the latter length being represented by but one, and due to a projecting stone. One case that was a quarter of an inch wide in the broadest part was weighted by seven stones, while the longest case was a mass of them. These cases were closed and contained pupae. When the little sand-dressed larvae took their walks up the sides of the bottle and on the leaves, the creatures reminded me of small hermit-crabs peeping out of their shells. The Caddis-worms seemed to have much the same lively, impertinent natures as those crabs, too.

Once in April in the other brook, when a great yellow Papilio Turnus buterfly was flying up and around the water-side, there was a biger Caddis-worm than Sandy had been. This larger Caddis was suddenly torn from the home of his enfancy. No more should he wander through a poll dragging sticks after him. His home, when it was not a plate, was to be a bottle.
This Caddis-worm was about one inch and three eighths long while in his case, because he had hitched two small logs to himself and insisted upon dragging them about with him. He was a lively fellow. Perhaps dragging weights is a good thing for a Caddis-worm’s constitution. Anyway he appeared so healthy that I thought he could endure making another covering for himself, and not die in the operation, either.
So I took his garment off from him and commanded him to go to work. I pounded up some red brick and some white and blue buttons and gave the pieces, expecting him to make a patriotic-looking garment.
It was about a quarter of two P.M. when this worm began dress-making, and his houses was finished by the next morning. It was evidently hard work and he was inclined to keep pretty still the next day, instead of trotting around the dish as he had one before a new dress was demanded. In making this fress he did indeed attach to himself a piece of red brick and one each of white and blue buttons, but his immediate covering was mostly of sand, and on his bosom he had fastened quite a sprig of green grass. I had laid that grass before him, thinking that perhaps he might like a bite during his exhausting labors. But E Pluribus Unum had Hibernian tendencies, evidently, and believed in the « wearing ‘ of the green. » He reversed his position, however, so that he afterward wore the grass at the other end of his garment.
I had thought that he was going to prosper finely after his dress-making, but two or three days afterward I came to his bottle and found him dead. The cause was owerwork, undoubtedly, and no matter how vigorous a Caddis-worm may seem, I do not think that I shall ever impose such labor on one again. Dress-making is evidently a great exhaustion of the vital forces of a Caddis-worm, and I felt guilty as I reflected that I had murdered two of the inoffencive beings.
In some places in that brook there are so many short, pebble-covered caddis cases on the stones that the gazer is irresistibly reminded of the little barnacles seen in such numbers on the rocks by the sea.
I brought home one Caddis-worm that was certainly an ingenious fellow. I marvelled at his style of architecture. It was somewhat the same that children use in building « houses » of clothes-pins. The little stuck out in all directions, and the gifted inhabitant of the structure looked very queer, hugging the stalks of grass on which he was wont to hang in the bottle. He must have had to hold on tightly, with all those sticks weighing him down. Still, he sometimes hung perpendiculary suspended by his legs. He could manage his house pretty well, and often made it stand out in different directions to suit him as he climbed. I should not have had the heart to take to pieces his house. It represented too much labor.
The little sand-covered Caddis-worms were quite given to hanging from the grass. I remember seing one « shin down » a slender stem, until losing hold either intentionally or not, he floated swiftly and gently down to the bottom. I do not know how any naturalist could see one of these little beings weaving so deftly its sandy dress, and not recognize the existence of the Infinite Kindliness that watches over even the meanest creatures and provides them with means of protecting themselves against the little bruises that must be so great to them. I do not know whether Job ever saw a Caddis-worm, but I think that the man of the land of Uz never gave his friend truer or more beautiful advice than when he said to them: « But as know the beasts, and they shall teach thee; an the fowls of the air, and they shall tell thee: « Or speak to the earth, and it shall teach thee: and the fishes of the sea shall declare unto thee.
« Who knoweth not in all these that the hand of the Lord hath wought this? »
Open some of the barnacle-like, stone covered little caddis cases that stud the stones and you will find the pupae. One that I examined was about a quarter of an inch long and showed very plainly the black eyes of the coming Caddis-fly.
These flies should remain about two weeks in a pupa state, I believe. Perhaps the water in a glass bottle may not be fresh enough for the pupae. At least I have never been able to keep my caddis pupae in them until transformation. The pupae seem to die, and a slight mould, such as one observes gather on all dead insects under water, forms on the caddis cases.