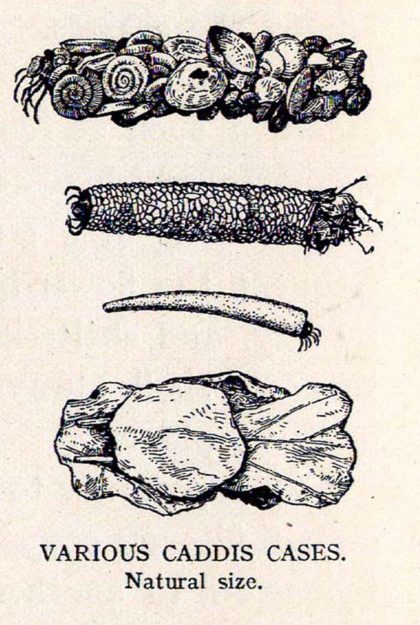 Early Spring is the best time to seek them, for then tey are fresh and the larvae are « at home. » They may be easily kept in an aquarium which should be provided with soil at the bottom, weeds and small mollusca, for the insects to use as building material. These larvae seem to have varied tastes in the matter of food, which is said to be generally of a vegetable nature, though some of those I once had were seen, on several occasions, to help themselves to the « bloodworms » put into the vessel in which they were confined for the dragon-fly larvae, which shared it with them. When full grown they spin an open Meshed network over the « doors » of their houses and change to the next or nymph stage being then provided with a strong pair of « jaws, » by means of which to cut the web when ready to take on the winged condition. Having done this, they leave the case, climb up some plant stem into the air, bust the skin of the thorax, and come out as flies.