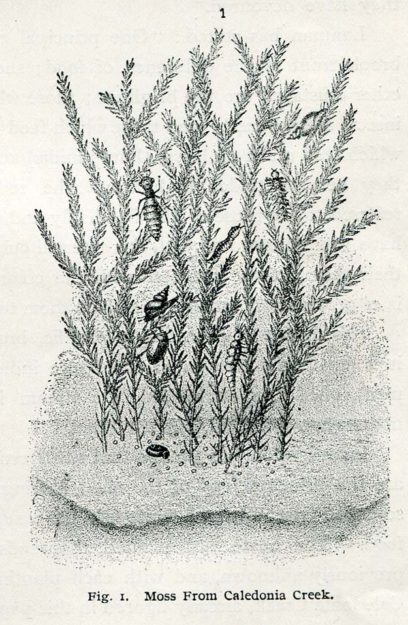 Réaumur says the Caddis worms are « found in small streams and brooks, in ponds and lakes ; in a world, in any piece of water which has plants living in or around it. They are usually vegetable feeders, but not exclusively so. The body of their larvae is lodged in a silken tube, to be outside of which are fastened fragments of different substances selected for the purpose of strengthening and defending it. The sheaths may be quite irregular, rough and prickly, or smooth and symmetrical. When the old sheath becomes too narrow or too short the larvae makes a fresh one. » (they frequently repair or extend the old case instead of making a new one.) « sometimes the new sheath differs more from the cast-off one than our dress of to-day differs from that or our grandfathers… They employ very differents materials, and the kind of material largely affects the dress which they put on. They make use of whole or nearly whole leaves, or little sticks and straws. Others use seeds, roots, grains of sand and gravel, or the shells of water-snails and bivalves ; in short all the materials which can be found in water are employed by particular Caddis worms. In some sheaths one only of these materials is employed, and these are the most neatly constructed. In other sheaths a number of differents materials are made use of, so that the larva is dressed, so to speak, in rags and tatters, and its covering is altogether shapeless. »
Figures 5, 6, 7, and 8 are examples of Caddis worm cases or sheaths, and all came from Caledonia Creek. Fig. 5 is composed of small stones, and is of natural size. Fig. 6 is twice natural size and is composed of gravel and a few larger stones. Fig. 7 is composed of bark, and Fig. 8 of charcoal and shells.

These examples were selected because they were found in a stream on which one of the state hatcheries is situated, and they represent cases constructed by four different species of Caddis worms.
McLachlan’s Trichoptera of the European Fauna shows cases that are quite unlike the figures here given, but all would be quickly recognized as Caddis worm cases from the illustrations in this paper.
Fig. 9 is an enlarged Caddis worm taken from the case of bark, Fig.7.
The line at the side of the worm indiçâtes its actual length. Some Caddis worm creep along the bottom of a Stream but others load their cases so heavily with gravel that they never more. At best the larvae is a poor swimmer, and to move at all they usually creep, hence the name « crêper » applied to the Caddis worm, and also to the May-fly larvae by the anlers in England where both are used for bait in fishing. The Caddis worm has at its hinder end two hooks projecting outward by which it holds itself in its case should an attempt be made to remove it. Réaumur says the case of gravel and sand are the most difficult to construct, and yet a Caddis worm will make one in five or six hours. In a trout pond on the top of a mountain in Vermont I saw the bottom literally paved with Caddis worm cases and the trout were the finest flavored I ever state.