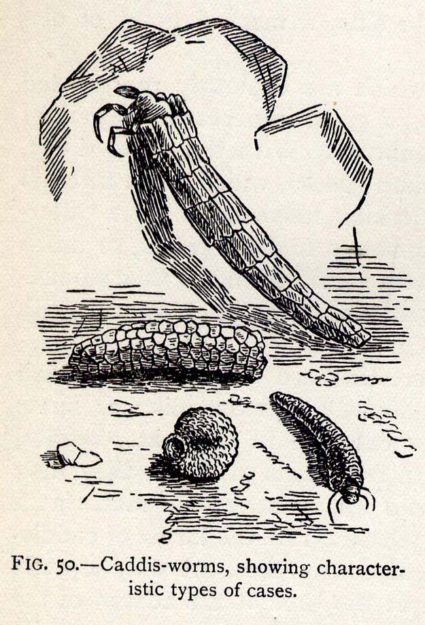 There is no difficulty in fining caddis larvae,, any pond or stream in summer will show a number of curious cases, an inch or more in length, sometimes attached to stones, but oftenest free, constructed of pieces of aquatic plants, of sand particles, of shells, or of little stones. Take some of these home in the collecting bottle, and place them in a flat dish with plentry of water weed, taking care not to overcrowf the vessel. When the contained larvae have recovered from the shock of transportation they will be observed to protrude from their cases the head of an insect, followed by the anterior part of a body bearing the three pairs of legs characteristic of insects. The larve move about rapidly, climbing over the water-plants with much dexterity, in spite of the often heavy case which must be dragged behind them. Much as in the case of the hermit-crab (q.v.), to which the caddis show certain analogies, the art of the body which can be extrude dis covered with a firm coat, while the remainder is soft and delicate. Again, much as the hermit is fixed to its borrowed shell by a strong hook in the posterior region, so the caddis is fixed to its case by two posterior hook-like processes. In bith cases, therefore, a direct attempt to extract the creature leads to disaster. In the caddis, however, the tube is open at the posterior as well as at the anterior end, and fishermen have long since found that the insertion of a blade of grass into the posterior end will cause the larva to relax its hold and leave its tube. It will then speedily build a new one, and the process may be watched in detail. The above operation is not, however, really necessary in order to see the caddis build, for if they be put into a vessel containing any building material different from that abundant in the pond from which they came, they will be seized with a desire to replace the old material on their backs by the newer. The teacher who shows caddis to her class will, of course, also draw the attention of its members to its very charming description of their habits to be found in Kingsley’s Water-babies. 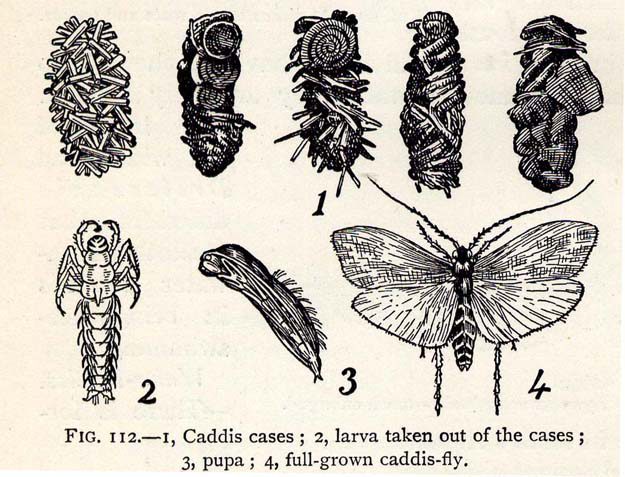 For the teacher’s purpose the specific names of the caddis are of very little importance, but for convenience of reference to systematic books it may be well to note that cases neatly constructed of tiny particles of sand, and having a conical and slightly curved shape, are due to the activity of Sericostoma multiguttatum ; those ornamented with short pieces of vegetation, or of fragments of stick, are inhabited by species of Phryganea ; in P. lunaris the pieces are laid side by side running parallel to the long axis of the case. Very curious are the cases of the species of Limnophilus, which are often constructed of the shells of living molluscs, who may be seen vainly endeavouring to extricate themselves from their very constrained position. Other caddis again content themselves with the hollow stalk of an aquatic plant, or merely weave together any kind of debris. The most interesting forms are those whose cases are unattached, but as already mentioned some fasten their houses to stones. 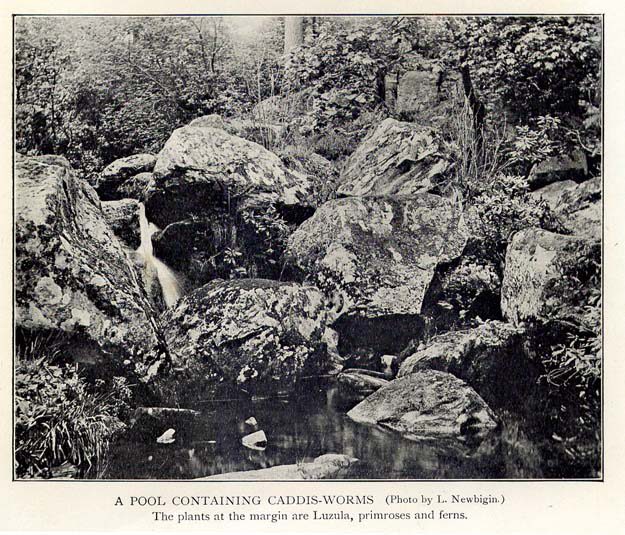 These are as a general rule those inhabiting running as opposed to still water and the teacher should not fail to point out the prédominance of caddis cases among the rubbish found at the sides of streams after floods, and to emphasis the dangers to which the forms found in running water are subject. A very interesting case is that constructed by the stream-dwelling Halesus auricollis, which is made of vegetable matter, but is weighted at the lower end by a tiny pebble, or even fastened down if the current is very strong.
Very little observation will show that the particles of which the case is composed are woven together by a silky substance which is secreted by a gland which open on the under surface of the head, and is quite similar to that which secretes the silk in a Caterpillar. As the object of the case is to protect the lank soft body from possible ennemies, such as fish, the caddis, whatever their natural tastes, will avail themselves of any building substance suplied to them. It is thus possible to make them builds nets of beads, little fragments of brightly coloured minerals, or even transparent glass. In the last case the resultant tube allows the movements of the larva to be discerned through it, which is justifiable if a detailed study of habits is to be made ; but otherwise the teacher will be well advised to limit herself to substances which occur naturally in the ponds and streams in which the caddis live.