Depending upon the kind of caddis that build it, a stone case may be tube-shaped or trumps-shaped ; it may resemble a coiled snail’s shell, a domed turtle’s shell, or a miniature shield with a pouch underneath where the caddis dwells. These cases are sometimes studded with precious stones or bits of colored glass, for the insects are attracted to bright, shiny objects. Caddises that hatched in a Nevada stream built their cases almost entirely of opals, which were scattered among the gravel on the bed of the stream. In England, caddises raised in an aquarium were provided with gold dust ; they responded by building solid gold cases. 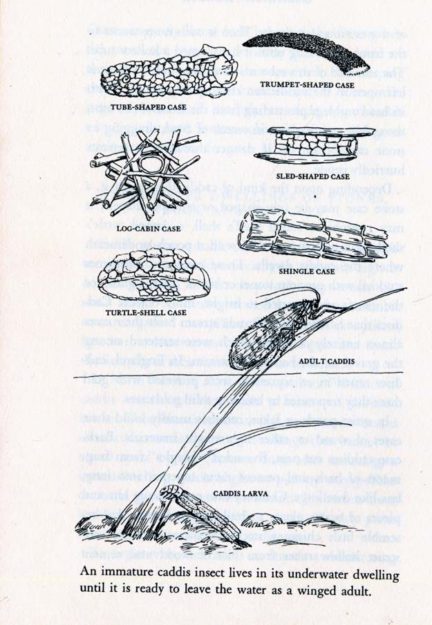 In quiet ponds or lakes, caddises usually build their cases of wood or other lightweight materials. Bark-case caddises cut neat, five-sided « shingles » from fragments of bark and cemented them together into long, box-like dwelling. Chimney-case caddises use bits and pieces of water plants to build tapered cases that resemble little chimney stacks. Sled-case caddises construct hollow tubes from bits of wood and cement small sticks each side of the tubes ; the sticks resemble the runners of a sled and apparently keep the cases from rolling over as the caddises drag them along.

Log-cabin caddises work with tiny sticks, plant stems, or pine needles. The insect cuts these « logs » to the same length with its jaws and cements them together crosswise one on top of another- as the logs of a frontier cabin are stacked grosswise one on top of another. Then the caddis gnaws its way through the center of the case, biting out a hollow living chamber inside.

Ordinarily, caddises ignore each other as they build their homes. But if there is a shortage of construction material in a particular area, the insects may fight among themselves. Sometimes they steal sticks or stones from the cases of their neighbors ; occasionally, a strong and agressive caddis will try to pull a weaker neighbor out of its case.

While most caddises build portable cases which they drag along behind them as they search for food, others settle down permanently in one spot. They build stone dwelling tubes which they cement to submerged rocks in the swiftest part of a stream, and they catch their food by constructing silken fishing nets