The caddis during his aquatic existence is a worm of no very prepossessing appearance, but he makes amends for his own want of personal attraction by investing himself with a most picturesque and original garment, which, in its formation, shows among different individuals a curious variety of taste or instinct we must call it, in the selection and adaptation of the materials employed. Sometimes it is a collection of seeds of various plants that are cemented together to form the caddis-worm’s case; sometimes a grass-stem is cut into nearly equal lengths, and arranged in a polygonal form of great regularity. One specimen that we fished up had made choice of the clearest crystalline grains of quartz from among the sand, and had built himself a veritable crystal palace. But the oddest and most attractive of these little curiosities, are those composed of fresh-water shells, while still tenanted by their living inhabitants, and arranged together in grotto fashion ( as shown in one of the accompanying figures), forming « a covering. » as Kirby and Pence remark, « as singular as if a savage, instead of clothing himself with squirrel skin, should sew together into a coat the animal themselves ». After a few months spent in these subaqueous operations, the caddis-worms retires into his cell, puts a grating over the aperture, and then shortly emerges in the shape of a large brown fly, to commence his aerial existence. 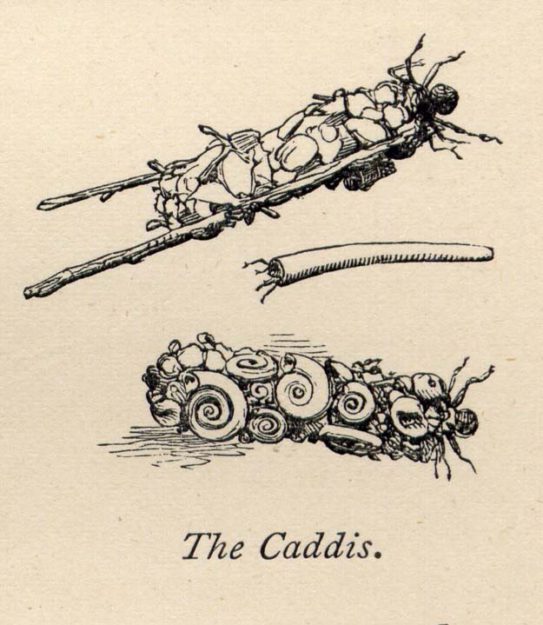