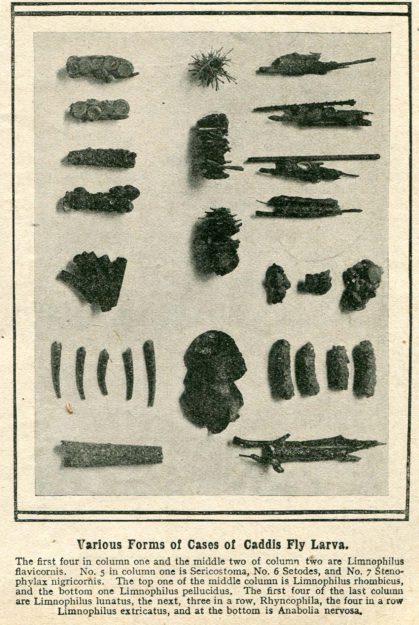 They construct silken tbes attaching to the outside fragments of various substances, and a glance at the photograph of but a few of these cases or sheaths will readily show that there is as much variety in form as exist between the mud hut of the crofter and the palatial home of the aristocrat.
In the building of their home they make use of all kinds of material found in the bed or sides of the pool or strea ; leaves, bits of stick, straw, seeds, roots, grains of gravel, sand, small stones, shells of bivalves, and other mollusca.
Nothing comes amiss to some species, while athers are careful to use only one kind of material in its formation.
The Limnophilidae as will be seen on referring to the photograph, build very beautiful structures, one of the most curious being the sheath of L. rhombicus, which is often constructed of small fragments of straws, which being placed transverserly to the axis of the tube, forms in cross section a circle within a polygon, whose angles are produced beyong. When constructed of moss, as is often the case with this species, the tube can be easily cut longitudinally and the smooth silken lining is readily observed.
L. pellucidus is content with joining portions of leaves together, forming a case flattish in form, but very wide in proportion.
Their sheaths are open at either end some being cylindrical in form of uniform width, while others are tapered down and often curved slightly.
When the sheath becomes too small for the growing larvae they makes a fresh one, or more frequently enlarge their cases by adding tier upon tier to the wider end.
Some of the caddis worms build sheaths of a very irregular character, as L. lanatus and A. nervose, placing here a bit of wood, there a bit of stone or perhaps a shell atttaching long sticks, which often pas beyond the mouth of the sheath.
Most of the sheaths are heavy in comparison with the insect, and would be beyond the power of the creature to pull along by means of its forelegs if its station in life was on dry land, but living entirely in the water, the mean specific gravity being nearly equal, it has little difficulty in getting about. Herein lies the reason why the worm attaches such awkward-loooking pieces of wood to its sheath, increasing its buoyancy by the means.
Caddis worms do not srand alone in the art of making cases to better protect themselves against the onslaughts of their ennemies, for certain moths, beetles, and other Neuropterous insects construct cases of a similar nature.
Without a protecting sheath for its delicate body, the caddis worm would stand a poor chance in the battle of life against many of the inhabitants of the pond, for it would be liable to attack on every hand and be little able to help itself.
Disciples of the « gentle art » know only too weld the value of these little worms as bait to tempt the passing fish, and many thousands are sacrified by the followers of Isaac Walton every year.
If the caddis worm is removed from its sheath and supplied with materials, it will in a short time construct another, and often in the absence of its ordinary building material it will, if given bits of glass, coral, etc., construct its sheath of these materials.