Adventure 33
We inspect Some Example of Insect Architecture
That insects are able to build shelters, some of which are cleverly constructed, is always a source of wonder. Indeed, many of them are capable builders, as the cadisworms.
The caddisworms are not worms but the larvae of small, mothlike insects, the caddis flies. Most of the caddisworms are Caterpillar-like, and most of them construct portable cases in which they live and which they drag about wherever they go, with only the front end of the body and their legs projecting from the case as they travel. The cases od different species differ greatly in form and in materials used, but what is most interesting in that each species uses a specific kind of material and builds its own style of house. Particles of dead leaves, sticks, pebbles, sand, and other substances are used and cemented together with a silk secreted by modified salivary glands. The silk is not spun into a thread but is poured forth in a gluelike sheet upon the materials to be cemented together.
Caddisworms inhabit practically every kind of aquatic situation and can be found through-out the summer; a few species, especially the net builders, can be found all winter. The commoner caddisworms occur in almost every brok, where they may be seen creeping over the bottom. They lok much like moving sticks and are sometimes called stick worms…../…. Figure 134 shows a case made of rectangular bits of thin leaves arranged in rings. It measures about an inch long and is made by the caddisworm, Neuronia, found in ponds and gently flowing streams. Figure 135 shows a case made with narrow strips of leaves arranged spirally and securely glued together. The maker, Phryganea, occurs in ponds among submerged plants. A case made of sand grains is shown in Figure 135. The larva, Molanna lives on the sandy borroms of slow streams and ponds. Figure 137 illustrates a cornucopiashaped case made of sand grains. 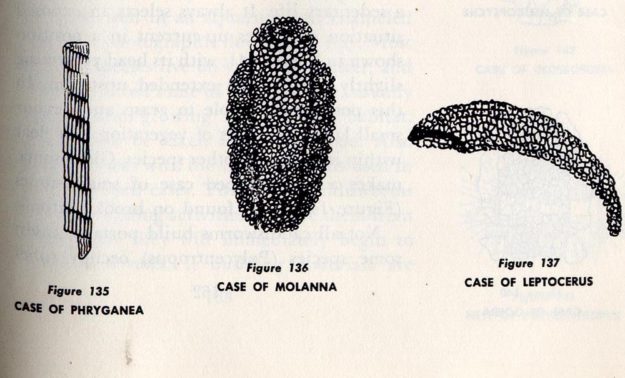 Leptocerus which occupies it, lives in the riffles of stony brooks. A case composed of sticks or of pieces of grass placed crosswise forming a case known as the log cabin type depicted in Figure 138. Its maker, Limnophilus, inhabits ponds and slow-moving streams. So does a species that makes its case of the shells of water snails. Helicopsyche, a caddisworm of stony streams, makes a case of sand grains that looks so muchlike the shell of a snail that it has been mistaken for a mollusk (Figure 139). Nother case, also made of sand grains (Figure 140), has stones glued to each side to serve as ballast. Its teanant, Goera, dwells in riffles of swift streams, and the stones prevent the case from being carried away by the current. A most remarkable case is one made of minute twigs, root fibers, and fragments of wood cut to the proper length to form even, straight edges. The case diverges toward the anterior end. During the first weeks of it existence the maker, Brachycentrus, lives in the side waters of brooks, where it forages along the banks. Then it moves into the center of the stream and attaches one front edge of the larger end to a submerged rock or stone. Securely cemented to its support, the insect now lives a sedentary life. It always selects an exposed situation and faces up-current in a position shown in Figure 141, with his head projecting slightly and its legs extented upstream. In this position it is able to grasp and devour Small larvae and bits of vegetation that float within its reach. Another species Glossosoma, makes a turtle-shaped case of small stones. (Figure 142). It is found on brook bottoms. Not all caddisworms build portable cases; some species (Polycentropus) occupy tubes make of silk and debris that are attached permanently to a support as a rock…/…
…/… Also provide them with the same materials used in building their cases. To observe caddisworms at their building activities remove them from their cases; they will immediately begin to build new ones, if building materials are avaible. Should you wonder what a caddis-worm would do if dispossessed of its home and deprived of its normal building materials, there is one way to find out. Substitute other materials and see what happens.