You may readily imagine such a defenceless litlle being would soon fall a victim to some hungry aquatic creature were it not protected in some way. With this apparently in mind, the tiny larva commences to build, almost as soon as it leaves its gelatinous cradle, a miniature fortress for itself suited to its especial requirements. It is this wondrous instinct which makes these insects so intrestinb in an aquarium. But before I tell you how to procure and manage theses queer little pets, it is necessary that you should know more about their life-history. 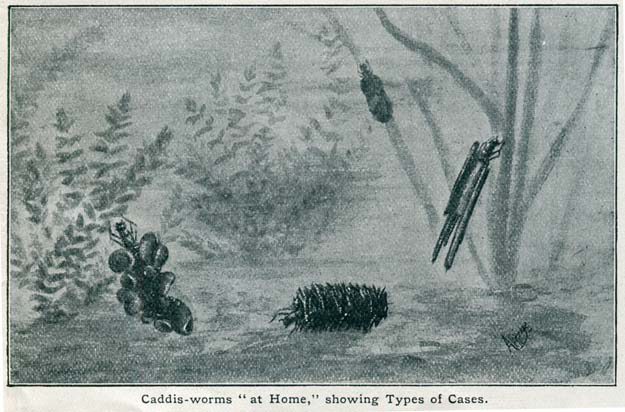 When once the Caddis larva is settled in its newly erected residence, nothing will tempt it therefrom, and wherever it may roam its portable house is never relinquished. As the latter, curiously enough, is generally of the same specific gravity as the water, its portage is not such a difficult matter as it may seem, the means by which it is accomplished being chiefly by the aid of certain hooks at the rear of the body. So tightly, inded, does the little creature cling to its cae that it will often allow itself to be litterally pulled in twain sooner than evacuate its dewelling.
A few species choose to live in running streams, and, in order to avoid being carried into uncongenial surroundings by the current these usually affix their cases to some large stone at the bottom of the water, where they spend their time on the look-out for passing morsels.
As with other larvae, the grub of the Caddis-fly is blessed with an insatiable appetite, and so rapidly does it « put on weight » that in a short time its increased proportions necessitate an enlargement of premises. This is effects very ingeniously without quitting its tenements by adding fresh circle of material to the front entrance of gradually increasing diameter. Having completed this task to its satisfaction, the little artisan proceeds to bite off the superfluous rear portion of the case, thus keeping the latter always of the required length. As these alterations take place periodically during the growth of the larva, its habitation, in time, becomes of a somewhat conical shape, and, through lack of the material with which it was originally constructed, it often happens that the additions are made with matter of a vastly different kind.
However irregular of a vastly the outside of a Caddis-case may be, the interior is always smooth and comfortable, being lined with a tough papery substance produced by the insect in the same manner as the silk of the familiar silk-worm. This secretion too, is used by the larva for cementing to the outside of its domicile the various objects which it may select as ornaments or for the purpose od deluding the inquisitive.
If confined in a jar or aquarium, theses industrious little creature live and thrive, carrying on their labours with perfect indifference to their unnatural surroundings. In fact, if some of the larvae be taken from their tubes and supplied with some artificial buiding materials, such as coloured beads, bits of coal, and such like, they will at once set to work to construct new dwelling for themselves of novel and curious designs. As I have already mentionne dit is no easy matter to entice the little Cadis-worm from the refuge which it has taken such great pains to construct, but a few gentle prods with a blade of grass or slender stick inserted at the rear entrance to the case is usually effective…/..
…/.. Place your captures in a can or bottle of water for conveyance home, and do not eglect to collect, also, a supply of weed, as you will require this for their future home. If there be any Canadian Water-weed (Anacharis) to be had, choose this in preference to any other aquatic plant, as it is by far the most hardy and useful for young purpose. You should have little difficulty in recognising it by its whorls of three or four ovaloblong leaves and uncommonly brittle stem…/…
…/… A collection of Caddis-fles, together with various types of case constructed by the larvae, form an extremely interesting and instructive aquisition.