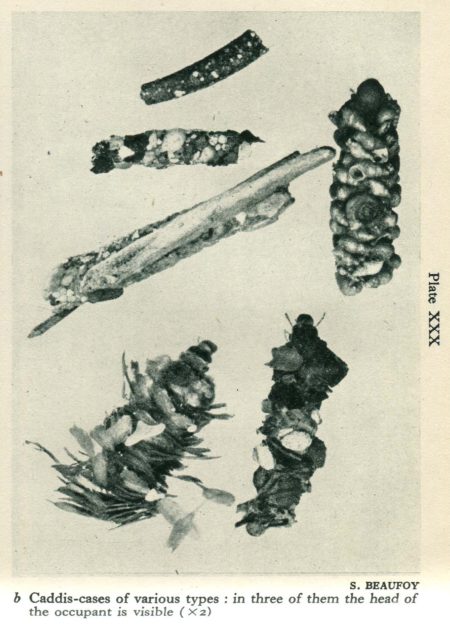 Most people who are familiar with the countryside have come across Caddis cases which are the portable habitations made by the larvae worms of Caddis-flies (order Trichoptera).These larvae are found in most types of fresh water excepting those which are foul. On the bottom of still waters the cases of several species of Limnophilus are often common ; other species only inhabit streams. The genus Rhyacophila and its allies need to be looked for in torrents and fast-flowing rivers, while large pools and lakes have their own quota of Caddis larvae. The cases are made in many different ways which vary a good deal according to the species and sometimes according to the materials that are available for their construction : only a very few are shown on Pl. XXX, p ; 259. As a rule larvae that inhabit swift streams attach heavy particles of stone to their cases, to serve as ballast whereas those living in still waters tend to use lighter materials possibly so as not to hamper them in moving about. A typical Caddis larva has three swelling on the first segment of  its hind-body (text-fig . 12 ,p. 51). These appear to help in maintaining the insect in a median position in its case so as to allow of a free flow of water all around it. This flow can be demonstrated when Caddis larvae are confined in vessels of water. All that is necesary is to drop some finely powdered lamp-black or other suitable material unto the water just in front of the entrance to a Caddis case. It will be seen that some of the particles are being wafted into the case and reppear in the water at the hind-end. This is due to the brething current that is set up by movements of the insect inside to ensure a steady flow of water over the gills.

A Caddis larva is difficult to remove from its case by force, in fact it can almost be pulled asunder before it will let go. This firm hold is effected by the action of a pair of limbs at the hind-end of the body, which bear large grappling hooks that grip the lining at the end of the case. The best way to remove a larva is to slit open the case as carefully as possible so as not injure the occupant. If a fresh supply of building materials be made available the Caddis larva will set about making a new abode and often complete it within an hour. Sometimes it will oblige by using such things as small coloured beads, bits of glass, broken fragments of shell, etc. Some  Caddis larvae will use pieces of mica to build cases with if nothing else is available: in a habitation of this kind that is nearly transparent something of the movements of the creature within can be seen.