Besides, the snail shell, though a tool for the crab, is something that the crab finds ready-made, though it may have to eat the maker first. An animal that build its Armor is more interesting. 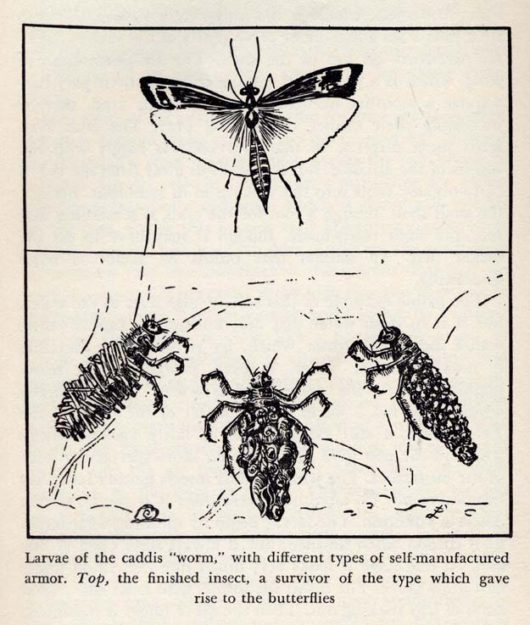 The prime example of this activity also lives in the water, but it is in fresh water that Macronema, the caddis worm, makes individual armor which by virtue of the fact that it does under water, is even portable. Like many popular names, the name «  caddis worm » is zoologically wrong. It is not a worm but an insect of the order of the Trichoptera, a still existing line of fairly ancient insects which in the past gave rise to the far more spectacular tribe of the butterflies. The winged adult insects neither look very impressive nor do anything interesting ; it is the larva that desserves attention. The larva begin by spinning what might be a cocoon when finished, but it always stays open at one end. At one stage it looks very much like the cut-off finger of a filmy glove. The insect sits Inside whith head and several pairs of legs sticking out. Then the glove finger is reinforced with extra-organic material : with tiny pebbles or with the empty shells of young freshwater snails, or with thin dead stalks of underwater plants, all carefully cut to equal length and fitted together to form a hexagonal tube.

The choice od reinforcing material is apparently governed by environment, or may even be determined by whatever was picked up first accidentally, but once a caddis « worm » has started with a material it sticks to it. If small shells form the armor it consistes of small shels exclusively-or of pebbles or of sticks. No «  artistic arrangements » with sticks on top and bottom, pebbles on the sides, and a round snail shell for the tail end.