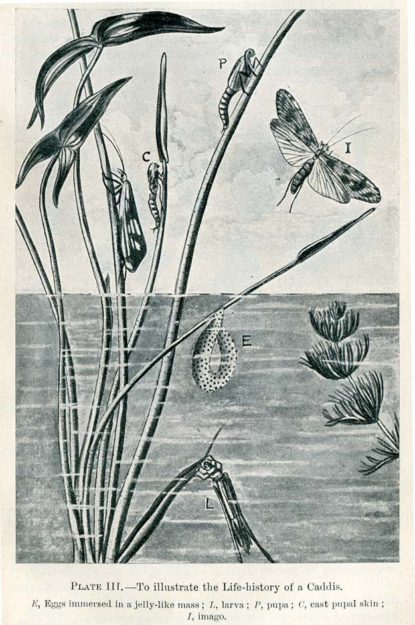 The cases often so closely resembles the ground it lies on, that it may be some time before the eye detects it, for even when moving it often appears at first merely as if a little piece of the debris at the bottom were shifting. It is very interesting to watch the manufacture of a case, or the adding of a new length to it when it has become too small for its growing inhabitant. If it is a new case that is to be made, two pieces of the material chosen are seized by the front legs, which are turned forward on either side of the head ; the pieces are bound together by silk threads given out from the salivary glands below the mouth and a third is bound to them in the same way. The proces is repeated intil a complete ring is formed, which in then pushed over the larva’s head, and a fresh row of fragments added in front, until the case is of sufficient length. Many of the cases are very rough and irregular on the outside, but all are lined with a smotth silken layer within. 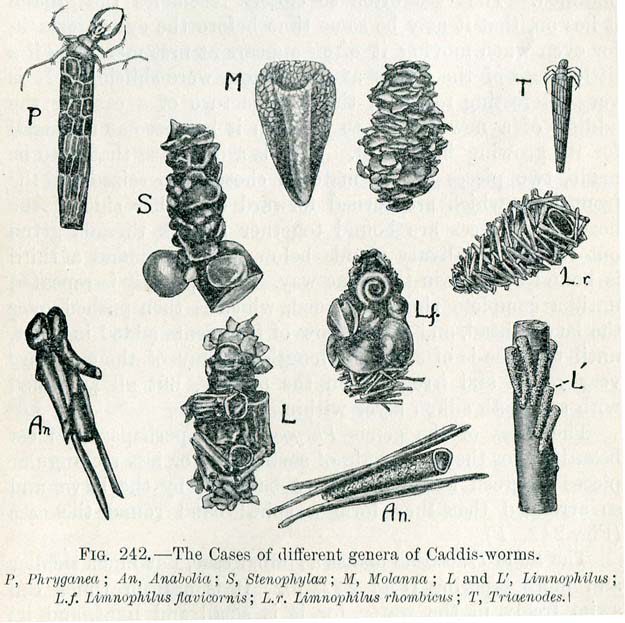 The cases of the genus Phryganea are perhaps the most beautiful, for they are made of small, more or less rectangular pieces of green leaf, which have been cut by the larva, and so arranged that they form a spiral band round the case (Fig. 242,P).
The little Triaenodes makes a similar cases, but much smaller and more tapering ( Fig. 241,T). It is a form which can swim freely in the water, for it is small and light, and its legs are unusually long, the hind legs being fringed with hairs.
The genus Limnophilus varies very much in its case-making taste. The species L. rhombicus constructs the very common spiky case made of tiny sticks or green stems placed transversely (Fig. 242,L .r.). L. flavicornis specially favours the shell of small bivalves and snails, and is even regardless of whether or no shells are still inhabited by their rightful owners, who many be carried off and remain for the rest of their lives fixed to the case of the caddis. Other species of Limnophilus make curved tubes of fine sand, or straight sandy tubes which are often found, many together, fixed to a piece of stick (Fig. 242, L).
Anabolia cases can usually be recognised by the long pieces of stick that are fastened along the sides of the compact, central case of tiny stones, or sand, or vegetable matter. These long additional sticks are supposed to give the case greater buoyancy in the water, so that it can be more easily carried along by the caddis-worm (Fig. 242, An).
Stenophylax forms a case of small stones, and attaches it to a big stone ; this may be necessary since it lives in running streams, and so has to guard against the danger of being swept away by the current (Fig. 242,S).
Molanna forms a pretty case of sand, the top being curved, and prolonged into a shield-like projection over the head and on either side of the body (Fig. 242, M).