We are looking for a strange animal.
Virginia captured one in the brook on her farm about a week ago and brought it in to me. She knows that my mother and I have lately been reading a book on the tiny wild animals that live in water, and she thought that I ought to be able to call it by name at once. But all I could say was: “ What do you suppose that thing is?”
“That thing” looked like a tube, about as thick as a pencil, made of bits of wood and bright gravel stuck together, and out of one end of it came something brown that looked like a head and legs; yes, they were certainly legs, for they crawled up the stem of a plant in the murky water in the Mason jar, dragging the tube after them, just as I have tried to show in the sketch on the next page. 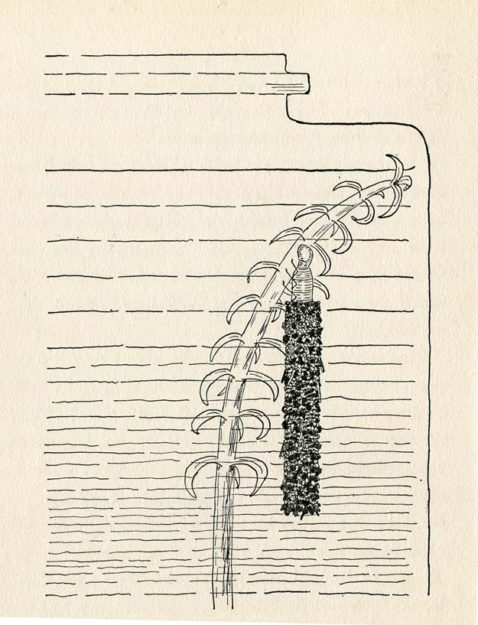 I brought the jar home in a paper bag- a lurching bus ride with that rubberless jar sloshing over in my lap- so that I could compare the tube with all the pictures of water-dwelling animals that I could find. But when, with the pompous aire of an orator unveiling a statue, I lifted the bag off the jar- the thing had disappeared! The water was far from clear, for the ride had stirred up the mud at the bottom, ut even the next day, when the mude had settled, we could not find the mysterious tube. There was nothing but some long worms that looked like pink threads, waving back and forth with one end anchored in the mud, and some tiny animals that looked like baby shrimps, which wooped about excitedly when they were rousted out.
Virginia is a good sport and, when I told her the news, captured another tube for me. Yesterday I got it home before it disappeared. For disappear it did! We saw it just once, soon after I reached home with it, and then we lost sight of it. We poured the contents of the Mason jar into a flat-sided jar, so that we could see things better, but this morning, after the water had cleared, we could see nothing of the strange animal, It must have died, and it’s tube must have fallen to pieces. We could find nothing alive except the same pink worms and shrimplike animals.
Since then we have found something about those tubes in our book. The little animal inside is the young of a caddis fly; protected byt the tube, which it builds out of gravel and sticks and lines with silk, it lives under water until it has grown big enough to change its form; then it climbs out of the water and changes into a caddis fly. That must be worth seeing! We have decided we simply must get another tube and keep the animal alive until it grows up and changes. But how can we keep it alive?
While I was writing that question, it suddenly flashed on me what the trouble was. The animal in that tube came from a brook; it was used to water that had plenty of air dissolved in it; and here we had cooped it up in a tall jar with only a small opening for air. What we need is a flat bowl in which the water will have a large surface exposed to the air. The big salad bowl wouldn’t be bad, but Mother says she’ll never eat out of it again if we put that muck from the book into it. The same answer goes for the fruit bowl. The only thing left is the old cut-glass bowl. What if it is much too good for our pink worms? We never use it for anything else. So we have just emptied the jar into it and put it on the kitchen window sill.
And now we have to find another tube.