The caddice-worms which we found living in the rows of tiny gray stone house in Stony Brook have plenty of poor relations whose houses are built of wood or even or less durable material. Some of these are so shiftless as to have no fixed habitation, but roam about from place to place, drifting with the currents, if there is one, or hanging about among the stems of water plants. Others are even worse, and might be compared to the semi-civilized people found on the old geographies. (I have never  encountered them elsewhere.) These live under stones in rude houses made of pebbles tied together with threads of silk, and pick up a precarious living by  trapping and fishing. So far as know these creatures never visit their more civilized relatives. But if an inhabitant of a neat little gray stone house happens to stray into the region of the hungry fisherman’s trap, woe be unto him! Caddice-worms are not discriminating and this particular kind is know to be carnivorous. «  All’s fish that comes to their nets ». They would probably think little of eating a near relative, much less a distant cousin. Since they are cannibals perhaps it is unfair to class them with the semi-civilized folk. Away with them into the outer darkness of the savage tribes, in spite of the fact that they are skilful net makers and practice a rude form of architecture. They appear again in a chapter called « An Insect Law-breaker. » 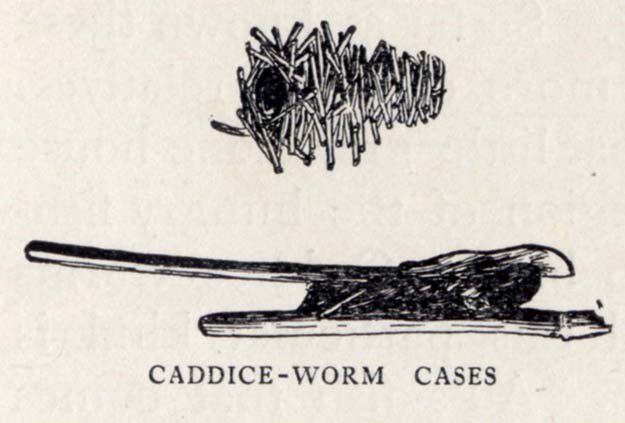 Perhaps the most well-know of the caddice-worm family are the little « Householders. » They can hardly be counted civilized since they have no fixed homes. They are more like the nomadic tribes, for they are at home whereverthey happen to be, even in the small boy’s aquarium or in a fruit jar on my study table. They are literally « Householders, » for they carry their houses everywhere they go, not on their backs like the turtles, but all over their bodies. When the outlook from the front door does not please, this caddice-worm retires and its house floats up near the surface of the water.

When I first looked into the water I did not see that these differend from any other small stick or bundle of sticks. But warily, without wishing to awaken suspicion in any one’s mind, out from the little bundle I was watching came a head. Several legs, long and spidery, then reached forth and made a rather poor show of paddling away. The first water plants which happened to be reached was seized with avidity, and the caddice-worm, house and all, hurried away among the stems and leaves.

Evidently the « cob-house » style of architecture did not originate with our family, though one of our childhood joys was the manufacture of high turrets of fresh clean corn-cobs. Caddice-worms must have used this style of building long before we learned it. Instead of cobs these creatures use shorts bits of grass stems, pieces of dead leaves or small ticks. The case is usually large rat the head end than at the tail end, increasing in both length and breath as the occupant grows.

The caddice-worm is not easily lured from his home. It takes a quick, emphatic poke from the rear to dislodge him, and no wonder, for near the tail end of the body are two strong forward-turning hooks which he fasten security into the inner lining of his case. Right manfully will he hold fast when an attempt is made to pull him from his house.

Not all the « Householders » make their cases of stems laid in cob-house fashion. Some tie sticks together lengthwise while others pick up whatever seems to be handy, including the empty shells of water mollusks and snails, small stones, glumes of grasses, twigs and sand. Some selectonly bright colored bits of quartz, making a most ornate mosaic dwelling, while a few have been known to go so far as to pick up a live snail, shell and all , and after attaching it securely, to carry shell and owner wherever they go, without so much as saying «  by your leave . » Among, the most curious of these is the species which constructs cases of sand in close imitation of snail shells. These are often attached in colonies to stones in streams. Why they should thus infringe on the snail’s patent is a mystery.

The houses of the nomadic caddice-worms are well ventilated, which is more than may be said of their human namesakes. A front doorway and a back doorway, with no doors to open and shut,- a thoroughly simple and entirely effective system. Sometimes there will be a screen of silk over the small back doorway, but it is usually wide open while the owner is active. The healthy caddice-worm simply revels in a constant stream of cold water ; a draught never gives him a cold.

The builder of the caddice case whether it be of stone, wood or sand, is also  a spinner of a sort of silk fiber useful ofttimes in holding the building materials together and in making the inside of the house comfortable. The caddice-worms are fond of silk linings. Since they have no furniture they upholster the whole house inside, sparing no pains to make it smooth and soft and suitable for their uses. If deprived of its case the caddice-worm makes a new one. It will even do this in the aquarium for some people- but not for me.