What a terrible place the bottom of the pond is. This is especially true for any animal that is not very well protected. Many of the insects hatch out only to be gobbled up by some hungry water creature. Many of them never get a chance to become grown up at all. Fortunately many of the pond animals have ways of protecting themselves. The crayfish has a hard shell and pincers with which to protect itself. Snails cannot be eaten very well because they have a hard shell. Some of the pond animals can hide under leaves and mud. Others can move or swim fast enough to escape their enemies. 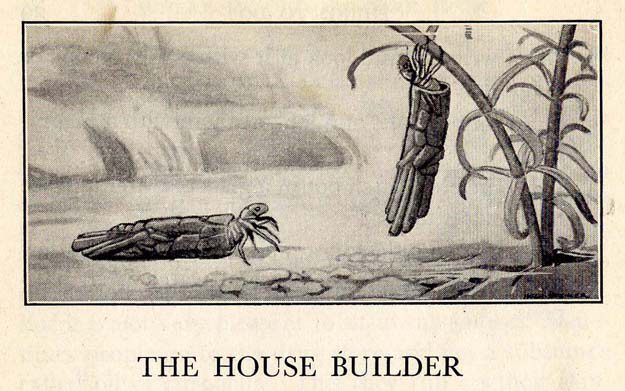 The caddis fly has a very interesting way of taking care of itself. When it first hatches out it is a very small white wormlike creature or larva. Now white is not a very good color for a pond animal to have. The pond bottom is nearly always dark colored and that makes the white show up very plainly. Any hungry prowler would notice it at once, and if it happened to be a fat, juicy caddis fly larva, it would be a choice morsel. 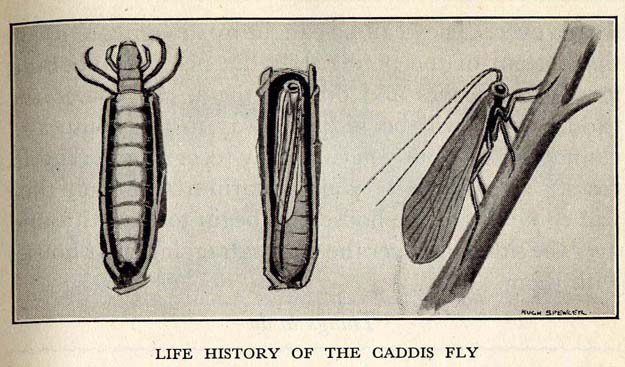 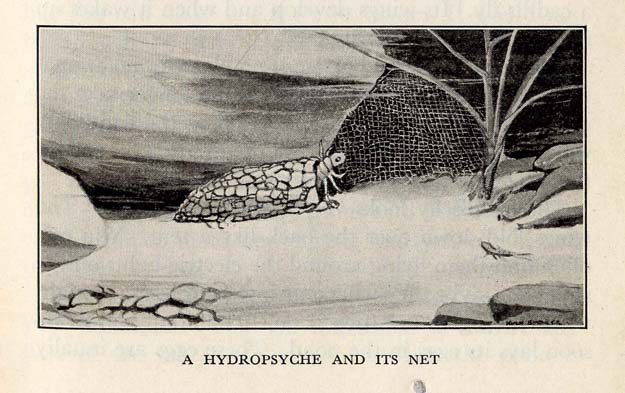 Of course it does not build a house like you live in, but it does build a house of sticks and stones. Sometimes it uses grass or bark or any other material that is handy on the pond bottom. As soon as the young caddis worm hatches out it starts to build its house. Like many other insects it makes in its body a sticky waterproof substance. This substance in most insects becomes silk when it dries. The caddis worm begins to make a hollow tube just large enough for its body. This thin structure could hardly be called a house, nor would it be much protection for the caddis worm. As soon as the tube begins to take form the worm gets pieces of stone or sticks and fastens them on the outside. There is no danger of the house becoming too small, because the worm keeps builing on to one end as it grows. Some of the caddis worms get small clams or shells and attach them to the silken tube. You can see from the picture on the next page that many different kinds of material are used in making the cases. Some of them are very strong, especially the ones that are covered with stones and shells. Others are not very strong because they are made of bits of leaves or straw or grass. Yet they help to protect the caddis worm because they look so much like sticks or other things on the pond bottom. Another reason why the cases protect the caddis worm is this, the caddis worm carries this house with it wherever it goes. It has two stout hooks on the end of its body that fasten on the inside of the house. On the head end of the body are six short legs. When the caddis worm wants to go out of its house to hunt food or move about, it can stretch out its body just as the earthworm does. In this way, it can stick its head and legs out of the house and crawl around dragging the house with it. If some prowler comes near, or at the approach of danger it contracts its body and pulls its head and legs back into its house. When the danger is passed, it again sticks out its head and legs and begins to crawl about in search of food.
There are about one hundred and fifty kinds of caddis worms and most of them eat nothing but small plants. You can see that the caddis worm would not have to move very fast to catch food because the plants cannot run from their enemies or protect themselves as the animals do. A few of the caddis worms do not eat plants but depend on animals that they can catch../.. 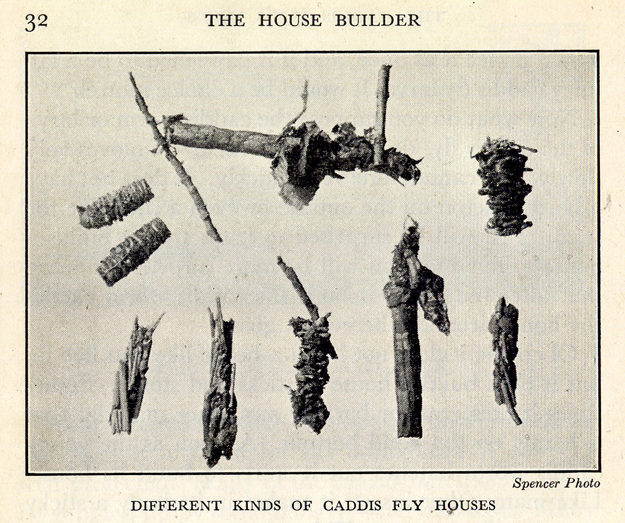 ../.. If you would like to see what the caddis worm looks like you can make one leave its home. It would not be of much use to try to pull one out, because it would stick in the tube and be pulled in two. Take one of the cases in your hand, and with a broon straw carefully punch in the rear of the tube. The caddis worm will soon tire of this attack and crawl out of its house. If you take the houses away and put bits of sand or any other material into the aquarium with them, they will often begin to build new houses and you can watch them build them.
You can easily collect these interesting creature for your aquarium.