Probably most of my readers have a some time or other, stretched themselves at full lenght on the bank of the brooks and idly watched the things that went by with the current or that made up the bed of the brook. Many curious things may be found in the brook.
Perhaps the bottom of the brook is covered with pebbles. As you watch you may be astonished to see some of these pebbles moving,- not only moving but travelling slowly against the current. Let us take one of the moving pebbles and look at it closely: – We fin dit is not a pebble but a lot of little pebbles firmly held together; still further investigation shows that it is not solid but is a hollow tube of pebbles lined on the inside with silk. We look inside, but see nothing. Put it carefully in shallow water where you can watch it closely. Presently it rocks a little, then a head appears at the opening, then a quarter of an inch of body, its tiny legs frantically clawing at the bottom; at last they get a grip, the pebble house turns over into a better position and under the influence of a strong pull slowly moves ahead. 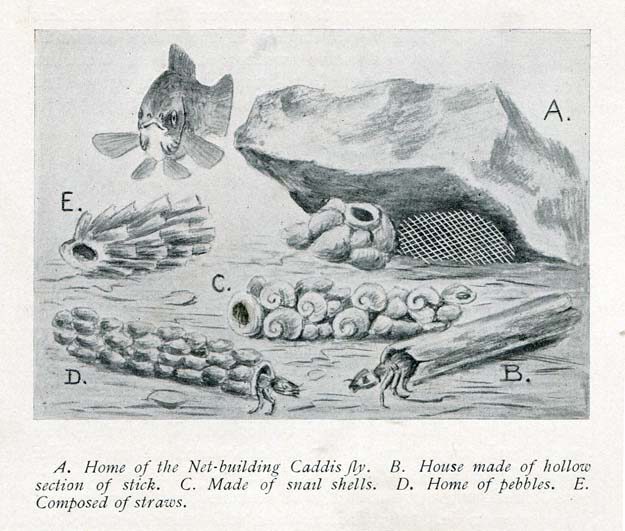 The occupant of this novel house is the caddis worm, larva of the caddis fly. There are a good many species of caddis flies, the larvae of all of then living under water. All of these worms build some sort of a house, – some use pebbles, some tiny sticks or straws and some leaves. What ever they are made of, the material is held firmly togethet with silk spun from the mouth of the worms, and the cavity is smootthly lined with the same material. You often see several styles of homes side by side in the same brook.
Of course the objects of making these house sis a protective one ; there are many predatory water beetles that would be glad to get at such toothsome morsels as cassis worms but the latter either escape notice or their armor is too strong. Dome of these cases are anchored to larger stones or pebbles but the majority of them are free to drift or to be carted about by their occupants.