Christopher Reynolds, The pond on my window-still, The story of a freshwater aquarium Londres, Andre Deutsch, 1969, pp. 85-94.

If you look down into the water of the pond you visit you are almost certain to se some Caddisfly larvae dragging their cases of stem fragments over the muddy bottom. Others will be clinging to the clumps of water weed that you pull out with your hands or on the floating weed that you bring up in the net. But you will have to search very carefully for these Caddis-larvae. Their cases of plant material not only protect the soft bodies of the larvae, but serve as a wonderful camouflage.
There are many kinds of Caddis-larvae. Each kind chooses a particular material for building its case, and arranges it in a special pattern. Thus you can usually tell the kind of Caddis-larva by looking at its case alone.

Most of the Caddis-larvae that I dredge from the bottom of the pond have cases made from bits of plant stem placed crosswise on the case. This gives them a very spiky appearance. Others have cases made entirely from small snail shells. The kinds that I find on the water plant near the surface have more slender cases, made from pieces of leaf and stem place lengthwise.
However, if the materials that the caddis-larvae naturally choose are not présent, they build cases from what is at hand, if given enough variety. For example, there are very few bits of stem on the floor of my aquarium, and so the Caddis-larvae that had built from loose stem fragments now began to fix small gravel stones to their cases. As they always build forwards these larvae soon had the front half of their cases patterned with little stones of different shapes and colours. This made an interesting contrast with the criss-crossing stems that now formed only the hind part of their cases. 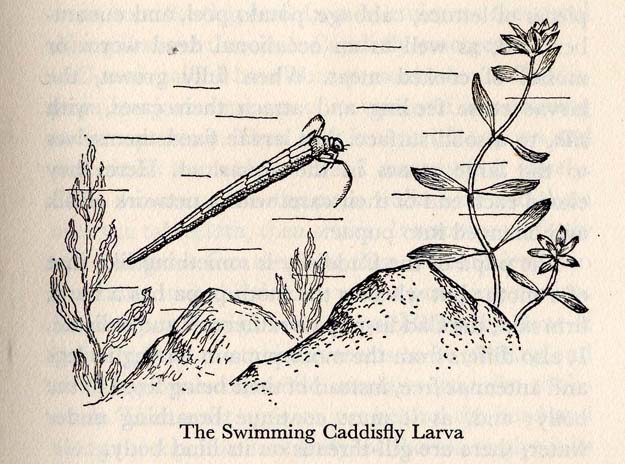 The caddis-larvae with cases of small shells used the snail shells in my aquarium. They did not mind whether the shells they used contained living snails or not. Thus some of my little snails ended their lives cemented together,, like bricks on a round chimney.
Other Caddis-larva, seeking material for enlarging their cases, used their jaws to cut out pieces of leaf and stem from plants growing in my aquarium. Some of the larvae always cut one or two pieces of stem about twice the length of their cases, and fixed these so that they extended backwards, like long, stiff tails. These tail pieces often hampered the larvae by getting caught up in the plants of the aquarium. However, in a pond they would probably give an added protection to a Caddis-larva by making its case more difficult for a Moorhen or a hungry fish to swallow.
You only see the front part of a Caddis-larva extending from its case as it moves about in the aquarium. This look very like the front part of a caterpillar. But whereas the caterpillar’s thre pairs of legs behind its head are short, the Caddis-larva’s second and third pair are fairly long. These second and third pairs are used for crawling or climbing plant stems. The short first pair, however, is used for holding particles of building matter, which the larva fixes with silk from its mouth to the front edge of its case. 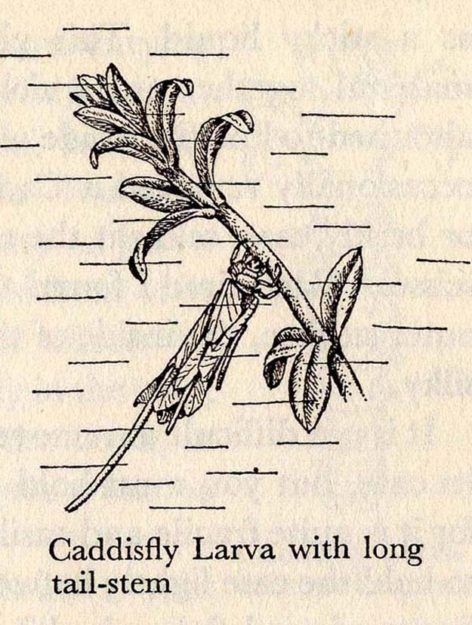