William Morgan Savin, Nature’s little artisans at work. The constructive ability of various insects and spiders, and the diversity of their methods in the struggle for life as observer on a New Jersey Estate. New York, William Edwin Rudge, (1922) 1926, p. 69-70.

Opinion differs, of course, but to me the most fascinating residents of a brook are the caddis-flies, skilled artisans in wood, stone, or silk, as the case may be, and probably the aquatic branch of a line of descent that gave us the butterflies and moths. The young caddis-flies are wormlike affairs, really not beautiful in themselves but some of them do truly wonderful things. Most of them construct cases in which they live with only their heads and the leg-bearing part of their bodies exposed. Those kinds that live in still water make their case with light material, some using sticks, others bits of leaves. Of those that use sticks, some place them lengthwise of the body, others crosswise and neatly arranged like the logs of a cabin. The kinds that live in swifter water are more given to using stones or bits of sand and one of these quite unintentionally played a neat joke on the collectors of shells. It builds a case coiled like a snail’s shell and makes it of grains of sand so skillfully and so smoothly joined together by a secretion from its mouth that human being were completely fooled into thinking that the caddis case was really the shell of a new species of snail. Occasionally a caddis-worm that uses stones to construct a case will add a real snail-shell to its masonry, not even rejecting one that still contains a living snail. In such instances many differences of opinion must arise between the caddis and the snail as to direction of movement. 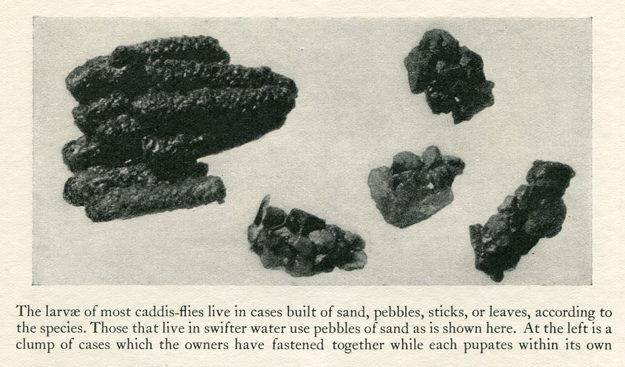