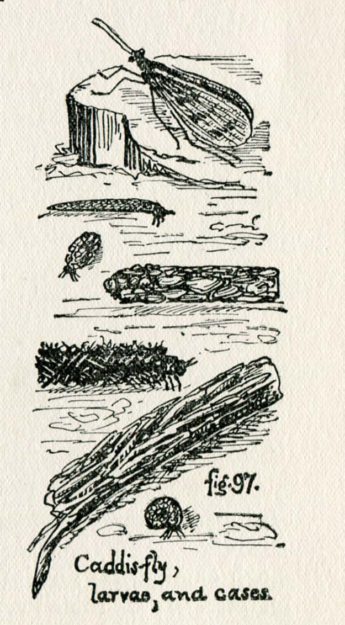 They are all small larvae with unprotected bodies, for the sheltering of which they construct tubes. The animal exudes a sticky thread for this purpose, which becomes of a tough silky tecture when hardened in the water. To this tube glued small irregular pebbles, grains of sand of various sizes, snail shells, bits of stick or wood, leaves, grass-blades, etc., each species using different materials for its house. They hold on to these cases by means of nipper-like appendages at the tail end. When pulled out carefully and put back into the water with its case, It will immediately get back into the same. If the case is removed, the little crawler will set about, without delay, to construct another. One specie builds a case, from small sand grains, in imitation of a flat spiral snail shell, which is liable to be mistaken for a snail’s house until the crawler betrays himself by his jerky motions and the hard little head which he sticks out.
Another species constructs a home of loosely joined little pebbles and hangs out a net in the water among the pebbles and stones at the bottom, in order to ensnare food. Still other species build their houses to the under surfaces of stones, where they lead sedentary lives.