Every one wha has peered into the waters of a running stream, or of a clear stagnant pool, has seen these remarkable construction moving over the bottom; and has felt a momentary interest, at least, in the clever tailors who could fashion such costumes for their protection.

The pond is a dangerous place of residence for any tender and juicy creature that is not gifted with power of Swift movement, or raptorial limbs or jaws; and the Caddis Worm has not been so provided. There is a long cylindrical body with a skin of the tenderest character, except the head and three adjoining rings to which the leg are attached; these have horny coverings. So the Caddis weaves himself a silken tube to which he attaches, as he proceeds, bits of foreign substances which convert the tube into a stronghold from whose door the armour-clad head and legs can protude and haul the structure along. 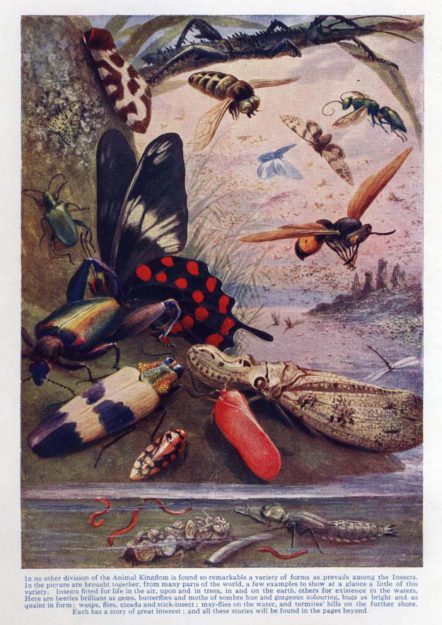 Caddis Worms are of many species, and according to the traditions of his kind each Caddis selects the materials he considers most suitable for the circumstances of his life. One species (Limnophilus pellucidus) is content with bits of leaves which enable him to pass unnoticed among the waterweeds from which they are bitten. Limnophilus rhombicus takes short pieces of grass-stem or bits of horsetail and arranges them transversely to the length of the case, so that the finished effects reminds ine of a hedgehog. L. flavicornis is not so exclusive in its choice of material; It will make its case of bits of thin twig not very orderly in their arrangement, or It will capture small water-snails, chiefly species of Planorbis, but often the little freshwater bivalves ( Sphaerium), in eithers case with the shell still tenanted by its builder. Such a dress of living molluscs is apparently cumbrous by reason of its weight, so we often find that the tailor has redressed the balance by fixing along each side of his tube a bit of stick, perhaps twice its length. This gives the required buoyancy, though not sufficient to float the structure. Anabolia nervosa, which makes its case of small fragments of stones, adopts the same method for lightening it. Sericostoma and Setodes makes their cases of sand, very neatly spread over the skill lining, slightly tapering and curved. Setodes is in form exactly like the marine shell know as the tusk shell (Dentaliuym).

These cases carefully examined, will be found to be broader at one end than at the other- « and thereby hangs a tale » The Caddis Worm, as the advance of life causes it to increase both in girth and length, does not provide for the increment in the way adopted by the Caterpillar of the Clothes Moth. The Caddis Worm’s method set down on paper may look suspiciously like that of the legendary Irishman who is said to have lengthened a too short blanket by cutting a piece off the top and sewing it on the bottom. As the Caddis case gets too straits, he cuts a piece oo the rear, which is the inconvenient portion, and makes additions to the front end. By always maintaining the slight tapering form in this way, there is never any necessity to split the case down the sides and insert gussets.