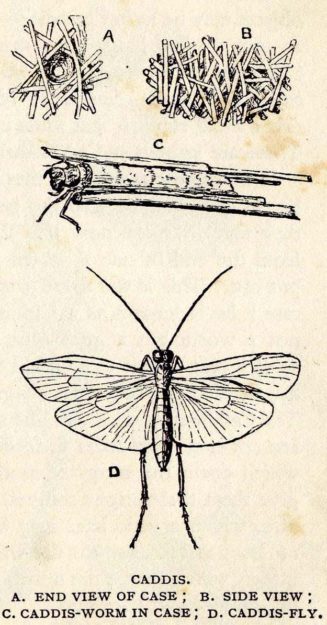 Unless we have met with thembefore, some of these moving objects may be rather puzzling. They are little tubes, an inch or less long, some made of grains of sand, bits of gravel, leaves of pond-weeds, short bits of twig, small snail-shells, fragments of grass-stems, or any other small rubbish that finds its way to the bottom. These are known as Caddis-cases.

If we scoop up a few of these and put them in our bottle, we shall be able the better to see just what they are. We see now that they are hollow; and from the end of one a brown head and six legs are put out. This is the front part of the builder of the case: he is know as a Caddis-worm, though he is not a worm but a grub- the first stage in the life of an insect know as a Caddis-fly.