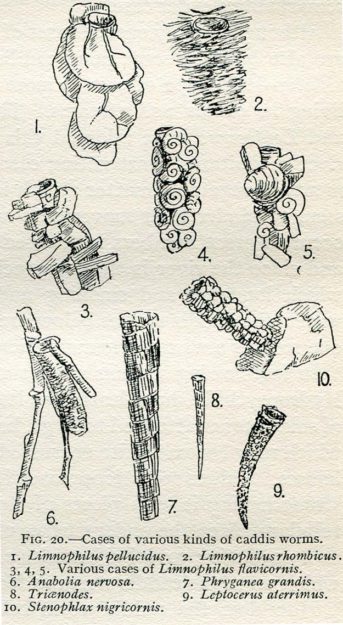 The caddis worm, in flowing water, are more easily seen, If we settle down on the bank of a canal or sluggish stream, and Watch the ripples stir the grass roots, and whirl Dead leaves and other debris in a slow dance from stone to stone, our attention may be arrested by small bits of stick, cither resisting the force of the water or movung at an angle to the direction of its flow. We secure a few of the small, apparently inanimate objects that seem to defy Newton’s laws of motion. The discovery will at once be made that the pieces of stick or roots, as well a small particles of mud or stonc, are held together in tubular form, and that the tube itself is inhabited. The owner soon appears at the wider opening of the case, presenting several legs and a dark coloured head. Even more of the body may presently be revealed especially if we place the animal in some water in the hollow of our hand. It will then be seen that behind the dark head is a segmented almost worm-like body, soft and weak, and covered with thick soft threads. There are three pairs of strong legs dispkaying the structure typical insects. More than this the creature does not vouchsafe to display and as we firmily but gently take hold of the front of the animal and try to remove it from its case, it becomes quite obvious that it is attached to the case in some manner, and that our purpose cannot be fulfilled without inflicting grievous bodily harm. This is a typical caddis worm. However great may be the variety these insects display in the mode of constructing the case, in the locality in which they drive, and even in personal appearance, their general manner of living is the same. They are obviously not worms in the scientific sense of the word; their well-developed head with strong biting jaws, their clearly marked thorax with three pairs of jointed legs, not to speak of their subsequent development, all testify to the fact that the animal bélongs to the order of insects. It may cause some surprise that so obscure little creature as the caddis worm (case worm) should be honoured with a popular name, which indiçâtes that the lay mind has long ago become cognisant of it. This is due to a matter of practical utility, for the caddis worms are know to be excellent bait for fishing, and in some localities the name « cad bait » is actually in use. Even superficial investigation will soon show to the collector of caddis worms that there is not one species of these insects building its case with one variety of material in one kind of environment and of another in other surroundings, but that the caddis-worms themselves are different forming genera and species, each with their characteristic to glue together fine grains of sand or very small stones, while the family to the Phryganeidae use piece of leaves and stems for the construction of their case.