Among caddisflies some are know as case-makers because the larvae fashion a protective covering. The young insect starts the case by plastering its underside with grains of sand, bits of stream vegetation, and other debris of its watery habitat. The accumulation is held in place by a silken thread excreted from a gland as the edge of the labium, the lower lip. The thread has an adhesive property that holds the bits of this and that together, and as the insect enlarges the case to meet the demands of its increasing size, it uses the sticky silken thread to hold together the necessary additions. 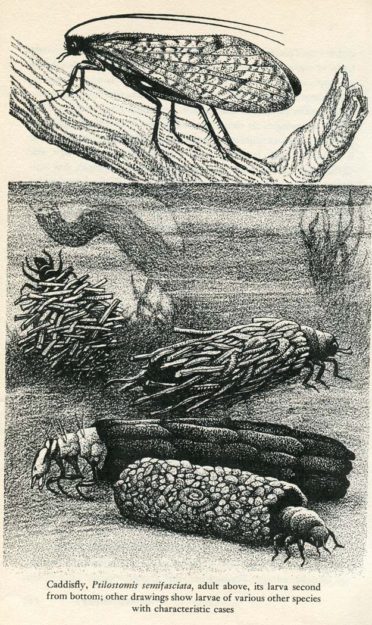 The design of the case varie with the species, one larva puts together a spiral-shaped case, another builds a shield-shaped affair. The case of Triaenodes bicolor is elongated, and is carried wherever the insects goes. One of its three pairs of legs is shot out through little openings. Slender and fringed, the legs serve as oras to row the creature from one place to another. And there is at least one species of case-making larva that uses bits of shells from fresh-water clams for its protective covering.