These insects, which are in themselves so defenceless, would soon fall victims to fish and other aquatic animals were they not endowed with an instinct which makes them about the most interesting inhabitants of the fresh-water aquarium. Under the influence of this instincts, they build for themselves houses, portable in most cases, but stationary in others, in which they are more or less secure from the attacks of their numerous ennemies. These houses are formed in various shapes, and are made of various materials, according, as a rule, to the species of the larva which constructs them. Sometimes the materials depend to a great extent, upon the locality. The caddis-cases, as they are generally called, are made of pieces of stick, leaves, sand, small stones, shells of molluscs, moss, rushes, seeds, and the like. These cases are formed either of all one kind of substance or of two or more different kinds. But whatever material is used, the larva generally manage to make these places of refuge of the same specific gravity as the water, so that they may have no difficulty materials together by the help of a viscous secretion, which on exposure hardens into a kind of silk. The insides of the caddis-cases are also lined with the silk-like substance. The larvae are able to cling most tenaciously to their tubes by means of small hooks placed at the extremity of their bodies, by the third pair of legs, which are often longer than the rest, and in many species by the help of three smaller humps situated upon the first segment of the soft part of their bodies. So firmly, indedd, will these creatures hold to their cases, that an attempt to forcibly drag them out would only end in their being pulled in half-or, at any rate, in their death. But they may easily be disloged by inserting the stalk of a leaf or a very thin piece of stick into the end at which is the extremity of the insect. This part or the tube generally of smaller diameter than the other, and the animal will nearly always after a little tickling, avacuate its fortress. Sometimes the larvae will voluntarily leave their cases, but whether they have been driven out of their homes, or have left of their own accord, they will generally return to them upon the first opportunity.

It is a very interesting sight to see these clever little architects and builders at work. Upon being taken from their cases and placed naked, along with suitable material, in a saucer or other vessel, they will readily make news tubes. They can be persuaded to construct their dwelling of pieces of caol, bits of glass, beads, filings of metal, and other things of a simular kind. Some caddis-worms work much more quickly than others, but the speed of construction frequently depends upon the materials at hand.
There are in Great Britain about on hundred and sixty different species iof Caddis-flies, which have been divided by Mr. McLachlan, the autour of the « Monographic Revision and Synopsis of the European Trichoptera , » into seven families. Of these families, that of the Phryganeidae (Gr. phruganon, a bundle of sticks) containts the largest species ; and that of the Limnophilidae the most numerous. It will, of course, be impossible to refer in this chapter to anything like all the species no ris it necessary, for reference to a few of them will be quite sufficient to remind those who do know, or to show those who do not know, how very interesting the larvae of the Caddis-flies are. 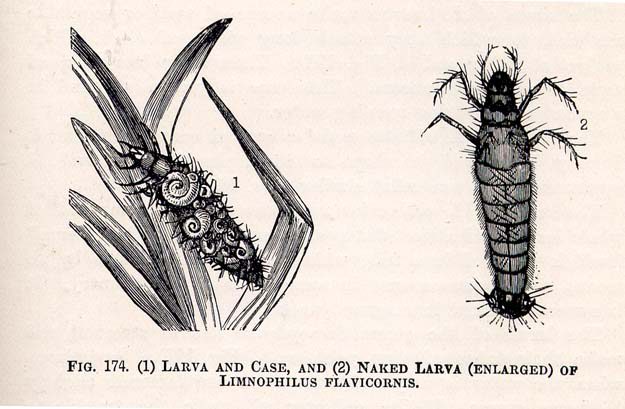 The worl of Phryganea grandis makes a cylindrical case (a, Fig. 171) of almost equall diameter throughout and forms it of portions of leaves and other vegetable matter arranged spirally. This larva and its case are generally found in ponds or very slow-running streams. The insect, in common with many others, has the habit of turning itself while within its tube, so that it can protrude its head at either end. Phryganea grandis (Fig. 172), about the largest British species, is a little more than 3/4in. Long, and its wings, when expanded, are at least 2in. From tip to tip. It is one of the commonest and handsomest of the Caddis-flies. It may be know by its ash-coloured anterior wings, Brown posterior wings, and yellow-ringed antennae. Like all its relatives, it folds its wings alongside of its body when at rest.
The larva of P. obsoleta, P. striata, and all of the family make the same kind of cases as that of P. grandis. P. minor is the smallest member of the Phryganeidae. It is rather a handsome insect. Its anterior wings are spotted.
The larvae of the large and well-know family of the Limnophilidae make cases very varied in their construction. They may be found either in stagnant or quick-running water. The case of the Limnophilus rhombicus (Fig. 173) is rather common and cumbersome. It is made of pieces of vegetable fibre, pieces of stick or twigs of various thickness, bits of grass, and portions of moss. These are all cut about the same length and laid transversely, giving the whole case a bristling appearance.
The cases of the larvae of the Caddis-fly L. flavicornis are very varied, and often uncommonly beautiful and interesting. Some of them are most regular in their construction and others exceedingly irregular. Occasionally they are made of the same kind of materials which are used by the larvae of L. rhombicus, with the shell of a small species of Planorbis added here and there (d, Fig. 171). Not frequently are they constructed entirely, or almost entirely, of these shells, which are so closely and skilfully packed together, that as many as forty or fifty shells may be counted in a single case (1, Fig. 174). The larvae of Limnophilus flavicornis (2, Fig. 174) will use other shells besides those of tiny Planorbes in the formation of its tube. Not only will it press into its service small univalves of any kind it may happen to meet with, but even bivalves, such as the Sphoerium corneum, other Sphoeria, or some of the Pisidia. It seems to be quite careless whether it makes use of the right or left valve, or both valves of one of these molluscs. Nor does it stop to find out, before it « annexes » a shell, whether the owner of it has left or not ; for it is by no means an unusual thing to find a caddis-case composed of shells in which the animals still live. This is rather hard upon the poor molluscs, for they have to be carried about as their captor wishes. It is a very good plan for those who are collecting frehs-water shells to examine the cases made by the larvae of L. flavicornis. Of course, it will be readily seen that the tubes formed of such a variety of materials must often be very irregular, as well as apparently cumbersome.
The larvae of L. vittalus make a case of sand or vegetable materila, to which they attach long pieces of stick, which project at either end (c, Fig. 171). These long bits of wood seem to act as balancers. This case is generally found in stagnant or very slow-running water.
The larvae of L. vittalus make a curved case of fine sand. It may be likened in shape to an elephant’s tusk, and in appearance it is sowewhat similar to e, fig. 171.
The larva of L. pellucidus make cases chiefly composed of whole leaves, laid almost flat again each other. This is by no means an uncommon case in some parts of the country. It is generally found in stagnant water.
The larva of the genus Stenophylax live in streams, and make their tubes of tiny pebbles (b, Fig. 171). Sometimes when the water is very swift, the cases are fastened slightly to large stones. If the collector will take the trouble to examine the lower part of large stones in quick-running streams he will frequently find bunches of very small gravel attached to that part . So firmly are they fastened that it requires quite a strong presssure of the finger or thumb to renove them. These bunches are fixed cases of the caddis-worm. The larvae of Caddis-flies found in quick-running water are not suitable for the aquarium.
As the Caddis-worms grows, it enlarges its case by making an addition to the larger end. When this is done, the case is shortened at the other end. While the Caddis-worm is moving from place to place, it protrudes its body just sufficiently to use its legs, and when it is attacked by an enemy it withdraws itself deeply into its tube.