It cannot be supposed that any one who wanders by the margins of streams, lakes, or ponds, will pursue such an avocation long without becoming cognisant of certain cylindrical cases, fabricated of all kinds of trifles agglutinated together into a habitation for what are called « Caddis-worms ». These cases are most interesting examples of insect homes, as wonderful and instructive as birds nests, and as variable in appearance. Caddis-fles are little, unobtrusive insects, with four menbranous wings, and little that is attractive about them. We have many species, and all, with one or two exceptions, have aquatic larvae, and these latter construct for their residence the tubes called caddis-cases. One common form consists of a cylindrical tube, of equal diameter throughout, formed of fragments of leaves and other vegetable substances, neatly arranged in a spiral manner, with the spiral turned from left to right, or from right to left. The inhabitants of these cases have the power of turning themselves, so that their heads may be thrust out at either end. Other cases are fabricated of shells, seeds, pieces of wood, and rushes arranged in various order, so as to give great variety to their general appearance, more or less beautiful, according to the materials available to the little architect. Somestimes such materials have been artificially supplied in order to test the building instincts of the little larvae, and the result has been the construction of most ornamental cases. A tolerably common case is made from pieces of moss, cut into convenient lengths, but an equally abundant form of case is that in which the insect by no means confines itself to vegetable fragments, but uses all such objects as we have indicates above, or indeed almost any substance, without the slightest semblance of order or selection. « A conchologist might frequently examine these cases with profit, for a good miscellaneous shell-case will give a better idea of what fresh-water will give a better idea of what fresh-water molluscs may inhabit any particular spot than probably would many hours of dredging and searching. It matters little whether the shells be empty, or still contain their proper inmates, these latter must submit to be dragged about at the will of the creature thet has thus unceremoniously pressed them into its service ; and if they do not die in that position, they must patiently await the time when after the escape of the perfect insect, the binding materials composing it. »(1) 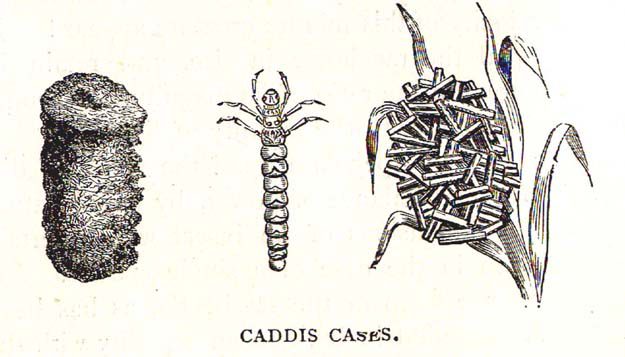 Other cases are formed of sand, either wholly or with long twigs attached to the outside. Small sand cases, round and quadrangular, staight or curved, cylindrical or tapering, according as they are the work of different species, will commonly be found in ponds , especially one of a larger kind, with the upper surface projecting at one end in such a manner that it serves as a cover and protection to the insect when it protrudes its head from the case in search of food. The knowledge of the existence of these case-makers is by no means of recent date. Hear what Aristote has written about them, long before microscopes or naturalist’s clubs were thought of : -« There is a small, worm-like creature, called Xylophthorus ; its variegated head extends beyond its case, its feet are at the uper extremity, as in other worms ; the rest of the body is contained in a case made of substance like a spider’s web, around and outside of which are chips of wood, so that the animal walks about with this attached to it. These creatures are attached to their cases as an oyster to its shell ; the whole of the case is joined to the worm, and does not fall out of it, but can be drawn out as if they graw together. If any one pulls off the case, the animal dies, and bcomes as helpless as a snail without its shell. As time advances, this worm becomes a chrysalis like a caterpillar, and lies withour motion ; but the nature of the winged creature that is produced from it has not beeen ascertained. »
(1) R. McLachlan in « Science-Gossip », 1868. 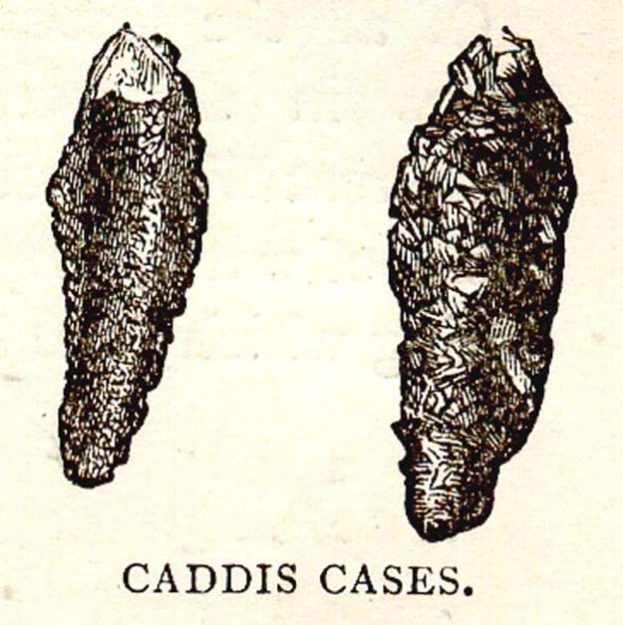