The Wise Caddis-Worm
« Three Wise old men were they, were they,
Who went for a walk on a summer’s day ;
One carried a gun which did nothing but snaps ;
One had a club and a cricket cap.
Bit the wisest one to keep off the heat
Wore an ulster down to his feet. » 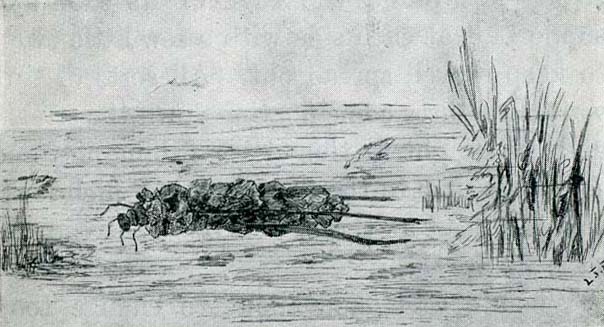 The water world is really such a dangerous place fo all tiny, soft, little insect folk that when they go for a swum or a walk, like the three wise old men, they certainly do need something to protect them from all the dragons, the tyrants, and the ogres of the pool.
To be sure they do not carry guns and clubs to ward off the attacks of ferocious creatures, but many tiny, defenceless insects have all sorts of tricks and dodhes by which they try to scare away or outwit their foes.
Some shoot jets of horrid stuff in the faces of their ennemis ; others have long, waving tails and bristles with wich they lash the water, hoping in this way to startle prowling monsters and make their escape in the confusion ; but the « wisest one » perhaps, is the funny old Caddis-worm ; for like the man who « wore an ulster down to his feet , » it clothes itself from top to toe in a large, trailing garment, into which when danger threaten it disappears altogether, like-
The man in the ulster, who smiled as he cried,
« Under my coati mean to hide… »
The Caddis-worms are really the funniest sight as they amble and shuffe along at the bottom of the pool, dragging their long, clumsy-looking cases behinf them. There is very little indeed of the insect itself to be seen, as the cautious Caddis never allows more than its head and shoulder to appear unclothed ; the rest of its long, thin body is always completely hidden away in its extraordinary garment. Its case is often so large and heavy that if it lived on dry land the Caddis would not be able to move at all, but under the water it is, of course, much easier to drag about a heavy load, and the insect can creep slowly along the floor of the pool or even climb up and down the weeds without much difficulty. As it ambles along on its six thin little legs the Caddis keeps a sharp look-out in all directions, ready to pop right back in its case at the first sign of danger ; but when all is safe once more, slowly and cautiously the little head and tiny legs are pushed out again and the funny old Caddis goes marching on its way. The Caddis has good reason for being so cautious, for although it has a hard red head and it shoulders are protected by a tough, horny skin of the same colour, the rest of its lo,g body is so soft and white and tender that it would be a tempting morsel for a hungry water creature. When out of its case, the Caddis look very much like a small caterpillar, only it has no cushion feet, and instead of a pair of claspers it has two little hooks at the end of its tail. 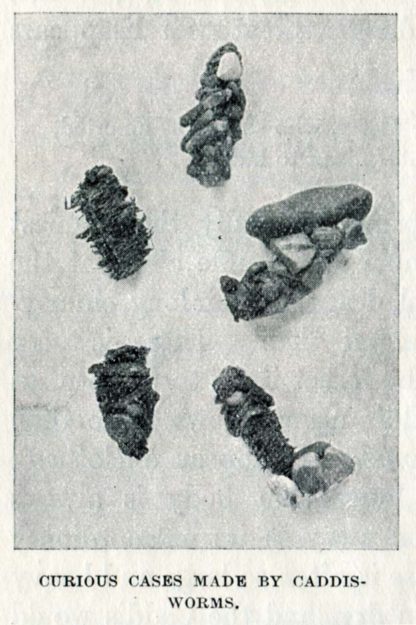 The caddis-worms do not all dress alike. They pay no regard to fashion, but each Caddis family has its own particular style of dress. They are most particular, too, about the material they use. One will have nothing but leaves, or bits of leaves, arranged round and round to make a kind of long, frilly skirt, (very much like the frocks that the little Basket-worms, which crawl about the trees and grass on dry land, wear). Another prefers a plain, neat garment, ans is always dressed in a long straight sort of coat, made of little pieces of grass or rushes carefully joined and bound together with silken threads, which the Caddis-worms spin from their mouths just as caterpillars do.
Some of theses funny creatures surround themselves with little bundles of twigs, straws, or chips of wood ; others trim. Their frocks with tiny shells and stones, sometimes they will even stick tiny live snail shells on their curious garments without in the least considering the feeling of the poor little snail inside ! And while some Caddis-worms make really beautiful little cases of sand, shell, seeds, or stones, all neatly and carefully fixed together with fine silky threads, others are most untidy creatures and just stick all sorts of odds and end together in a higgledy-piggledy fashion, so that they look as if they were dressed in rags and tatters. Even a tidy Caddis, after it has taken no end of trouble to join its leaves, or pieces of grass, or whatever it us using, neatly together, will suddenly add a long straggling wisp of straw or a broken twig to its costume and spoil the whole thing ! One never knows what a Caddis is going to do next.
But whatever their cases are made of, and whether they be neat or untidy, they are always lined with a finely woeven, silken tube, which makes a beautiful soft and cosy undergarment for the tender body of the little Caddis-worm.
Is not the least use trying to pull a Caddis out of its case, for it clings tightly to the silken lining with the little hooks on its tail and refuses the budge. The obstinate little thing would rather allow itself to be pulled in two than pulled out of its case. Of course the Caddis outgrows its strange garment several times while it lives under the water, and the nit will either add another frill or a fresh row or two of stones, as the case may be, or decide to make an entirely new costume. The case has always an opering at both ends in order to allow a constant Stream of water to flow through it ; for a Caddis does not come up to the surface to brethe as so many water insects do, but gets its supply of oxygen from the water, by means of feathery gils down its sides.
The Caddis-worms live chefly upon the weeds growing beneath the water, but now and again some of these funny insects, grow tired of having nothing but vegetable for every meal, and vary their food by catching and eating a few of the tiny water-dwellers.