Upon hatching most of the eruciform larvae begin to construct characteristic cases which are enlarged as needed. Some species make very simple cases on stones, others spin  elaborate ones from many kinds of material, but usually each species adheres to a more or less definite pattern ; a few burrow holes in bits of wood in which they are concealed and still others live in loose bag-like or funnel-shaped webs which are attached at the anterior end and suspended loosely in the current. Those building the movable cases attach themselves to the posterior end of their abodes by means of the caudal  prolegs. They allow only the armored head, thorax, and legs to protrude when swimming, feeding, or dragging their cases about, and withdraw entirely into the same a twill. Thus it is that one often sees small bits of sticks, leaves, and peculiar forms of pebbles, sand, and other shapeless objects moving on the bottoms in a slow jerky fashion. Species living in swift waters often construct loosely woven bags or tunnel-shaped abodes, attached only at the anterior end and kept inflated and in constant motion by the current. 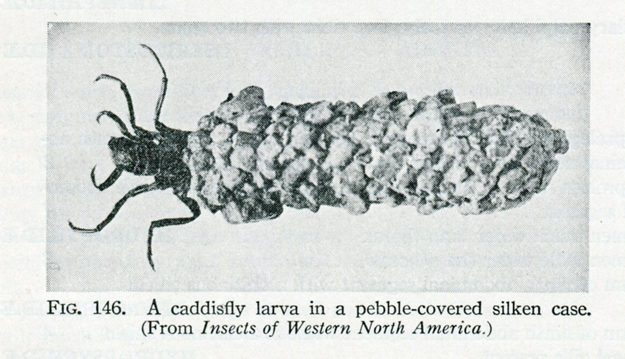