At one place on the side of the pond a stream of clear water enters: looking carefully at the sand and gravel on the bottom, we may observed some bits of stone apparently moving of their own accord. Let us take some of them out and examine. They prove (figure 8) to be in reality cylindrical cases, composed of bits of sand, gravel, fragments of shells, and in some cases even bits of wood ; within each is found what we ordinarily call a caddis-worm; in reality it is the larva of an insect know at the caddis-fly. Let us look closely; we may find caddis cases of a variety of forms. Figure 9 shows a large one, and the tenant (enlarged) removed and sketched alongside. These larvae are much prized as bait by fishermen: and doubtless, the ability to construct for themselves homes of hard material, is a protective endowment from their kind Creator. Other forms of caddis cases are shown in figures 10 and 11: the former composed of tiny snail shells, and the latter of bits of stick; this one is attached to a water plant. By protruding  the head and front limbs the little creature is able to move along the bottom of the water. 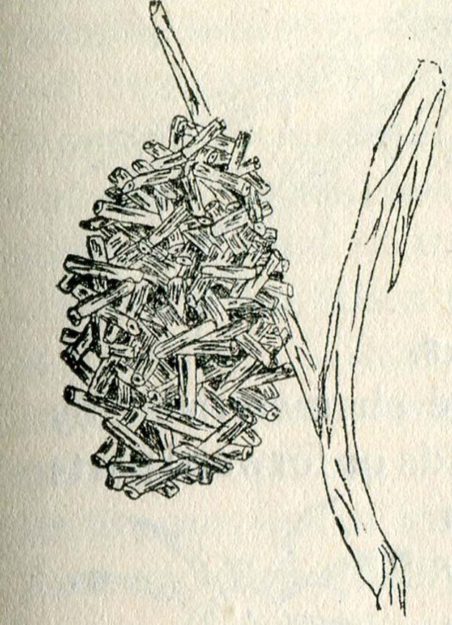